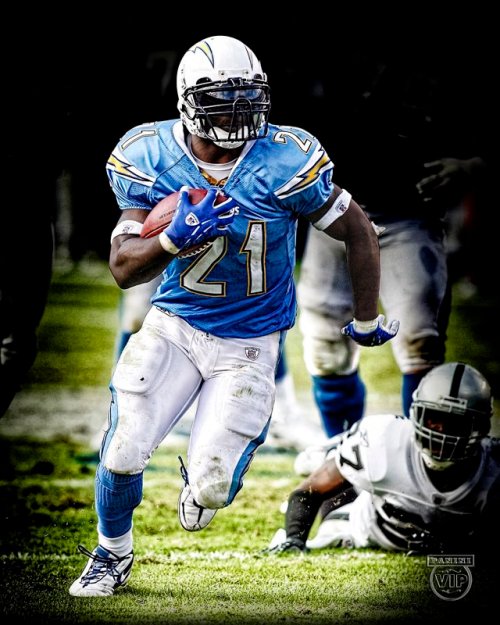 In 11 seasons with the Chargers and Jets, Tomlinson rushed for 13,684 yards and 145 touchdowns and made five Pro Bowl appearances. His TD mark is second-best on the career list for rushers behind only Emmitt Smith, while his yards rank fifth. His overall mark of 162 touchdowns ranks third own the career list behind only Jerry Rice and Smith, who both had longer NFL careers.

On Wednesday, panini revealed MLB hit king Pete Rose and eight-time boxing champ Thomas “Hitman” Hearns would be at the party, too. He compiled a 61-5-1 record during his career, which had him named Fighter of the Year by The Ring magazine in 1980 and 1984. He retired in 2006 and has helped promote fights since.

>>> NSCC Want even more? Click here to see all of our past pieces previously revealing nuggets of news for the show and keep up with newer stories tagged NSCC by clicking here.

Panini previously announced Latrell Sprewell and Glen Rice as guests revealed here today. In 13 seasons with the Warriors, Knicks and Timberwolves, Sprewell was a four-time All-Star averaging 18.3 points per game. Rice played 15 seasons for the Heat, Hornets, Lakers, Knicks, Rockets and Clippers and was a three-time All-Star who also averaged 18.3 a game. They’ll both be on hand along with Hearns and other guests to talk with collectors at the VIP party and each attendee will receive signed photos from them and the other stars attending the show.

Announced Tuesday was Chicago Bulls point guard Kris Dunn, who averaged 3.8 points and 2.4 assists per game for the Minnesota Timberwolves last season before he was part of the trade that sent Jimmy Butler to Minnesota.

The first guests announced on Monday were the sons of Hall of Famer Mickey Mantle, Danny and David, who helped bring the legendary player back to cards as part of a deal with Panini earlier this year.