With Giancarlo Stanton‘s six homers in his last six games, he’s helped everybody re-focus on players who aren’t those two rookies with all those home runs and he only needs two homers in his next two names to tie a major-league record.

The Miami Marlins slugger has an MLB-leading 44 homers on the year — a pace that’s actually right with Roger Maris‘ pace in 1961 — and that’s a career-high as well as a Marlins franchise record with plenty of games still left to play. (Yet, ironically, Stanton reportedly just cleared waivers — so some of those games left could come in a different uniform.)

But that’s not the only enigma that is Stanton, and it’s something that you can see on his earliest cards like this one from 2008 Donruss Elite Extra Edition when you compare them to today. What is it?

His autograph. He was always known as “Mike” Stanton as a kid growing up and in his first few years as a big-leaguer — something to keep things simple — but his full name is Giancarlo Cruz-Michael Stanton. He changed his name on all things MLB-official back in 2012 but his autographs have never changed. Go figure. (A recent card is above so you can compare it to his auto from Elite Extra Edition, which is a bargain product to hunt his early ink.)

Stanton’s current homer binge has helped him pull away from the totals posted by New York Yankees rookie Aaron Judge (36 HRs) and Cody Bellinger (34) but ironically Stanton has fewer certified autographs than Judge despite having many more years on cardboard.

Stanton appears on more than 500 certified autos among his more than 4,000 cards, while Judge is pushing 650 certifieds (he’ll top that with new arrivals this month) but not half as many overall. Go figure. Stanton’s earliest cards do use “Mike” on them with his first prospect cards in 2008 and his nine Rookie Cards dropping in 2010 products — Bowman Chrome, Bowman Draft, Bowman Platinum, Bowman Sterling, Topps Chrome, Topps Sterling, Triple Threads (his only signed RC) and Topps Update. Some of those wax boxes are easily found thanks to the print runs that came with the rookie sensations of that year. 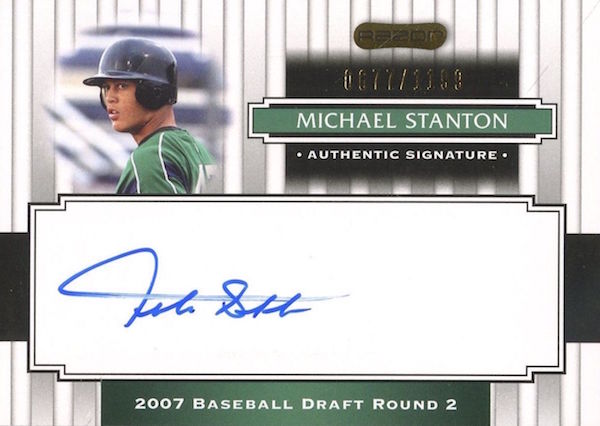 Stanton’s 2008 ink can be found in boxes of Elite Extra Edition along with Bowman Draft, Playoff Contenders, Prime Cuts, Razor Letterman and Razor Signature Series. He had zero autos in 2009 before his arrival on RCs. He’s had autos nearly every year since (none in 2016) and actually only has a handful of autos (all 1/1s) this year — probably a result of added demand for his time and the added dollars that come with that when it comes to time for signing. (That’s if he’s wanting to even sign at all.)

Now that he’s on a 60-homer pace this season — something not the norm in today’s game — there will probably be continued interest in the autographs of one of MLB’s most-powerful sluggers. Could there be even more if he lands in a more hyper-focused baseball market with a strong collecting base?

That’ll be something to watch — no matter what name is on his baseball card.