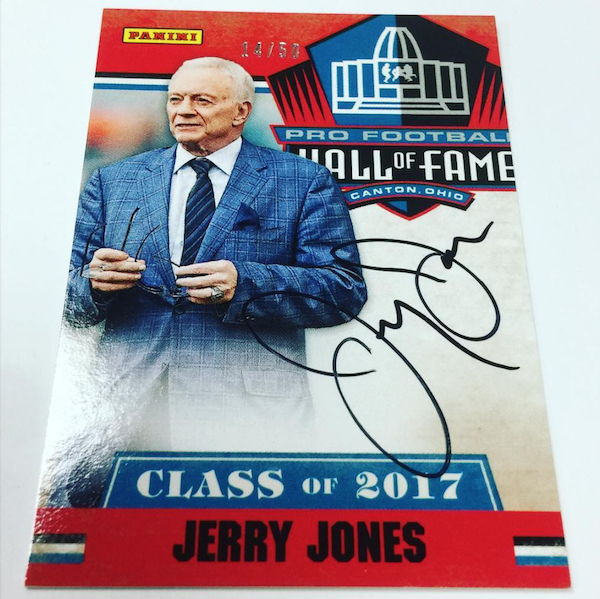 If you watch a Dallas Cowboys game, odds are you’ll see him at least once — typically after a win or some kind of replay that generated a reaction from the owner’s box high above the 50-yard line.

But one thing where Cowboys owner Jerry Jones isn’t often found is in packs of NFL cards but Panini America has a new rarity coming soon showing him as one of the newest members of the Pro Football Hall of Fame. 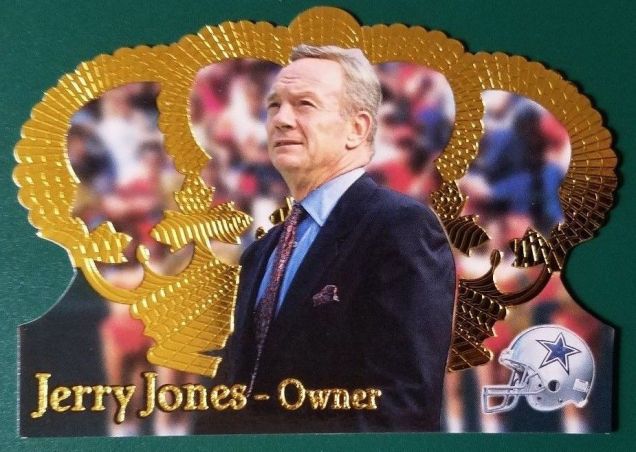 Details are still to come but Panini teased the card up top today — a 2017 Pro Football Hall of Fame Class of 2017 Inductees card limited to only 50 serial-numbered copies. In recent years, these have been made for signings or promotions around induction time and then a low volume of signed cards make their way into high-end packs.

This will be just his third appearance on a certified autograph card — and just his second for NFL releases — as he was previously appeared on a 2005 Upper Deck AFL Arenagraphs card and a 2010 Panini Classics Cowboys 50th Anniversary card that was limited to only 25 copies via redemption. Technically, he has another appearance — a 1993 Pro Line Profiles auto — but that card was signed by then-coach Jimmy Johnson since that was his card.

Overall, Jones appears on fewer than 15 different cards wth his own “Rookie Card” coming in 1995 Pacific Crown Royale (above). What else might Panini have coming? We’ll update this one once there’s something new to add.