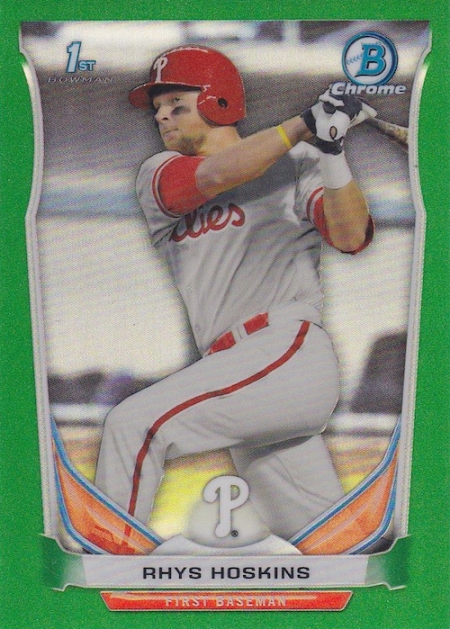 There’s a new hard-hitting powerful rookie in MLB this season but you’ll have to wait for his first Rookie Cards and battle if you have your sights on his few certified autographs.

His name is Rhys Hoskins and he’s a member of the Philadelphia Phillies — and he’s got a record 11 home runs in his first 18 games. That’s an MLB record for a hot start as well as a team rookie record for the month — with a few games to go. He’s also homered in his last five games, adding to the attention that comes with such a torrid pace.

Now, about that cardboard?

His Rookie Cards will not arrive until 2018 Topps Series 1 — and that could be the first place to find his first Topps autographs, too, as Topps has not announced his presence to come in any remaining Bowman releases where he could have been slated for a prospect auto.

Hoskins’ first cards are only found in packs of 2014 Bowman Draft and the 2014 Bowman Chrome Mini set. Between those, he’s got almost 50 cards out of his overall total of fewer than 175.

Want ink? He’s got just 22 different certified autographs and they are all found in boxes of 2016 Elite Extra Edition — all of them. All but two are serial-numbered and those that are numbered are limited to no more than 100 copies — and 11 of them are 1/1 cards. In short, he’s in there — but there’s not a lot to go around overall.

Other Hoskins cardboard can be found in 2016 Bowman Draft and Topps Heritage Minor League, while he can be found in this year’s versions of Bowman, Topps Pro Debut and Bowman Platinum. His only other card appearances are in Topps Now and any team-issued MiLB team sets.

Hoskins’ elusiveness on cardboard is a bit of an enigma. He hit 38 home runs with 116 RBI last season for Double-A Reading and had 17 homers before that with two teams. He had 29 homers with 91 RBI n 115 games this year before being called up. He’s not just a power guy, either, with a .287 average in four minor-league seasons and he’s hitting .297 with the Phillies now.