Simplicity, portability, affordability and the chase.

This collector found himself in the toy aisle of a chain store this week and noticed something relatively new that hadn’t caught my attention before. At a glance I was interested and instantly found myself scouring the pegs for something that ended up not being there.

It was a section of Jada Toys‘ new Nano Metalfigs that are available for a few different realms — DC Comics, Marvel Comics, Disney/Pixar, Street Fighter, Harry Potter — and they’re tiny metal sculptures that come in packages just like the big kids’ toys but they don’t come with a big price.

They’ve probably been around for some collectible genres I don’t watch all that closely, but the first wave of the new WWE figures caught my eye simply because they were so small … and so cheap. 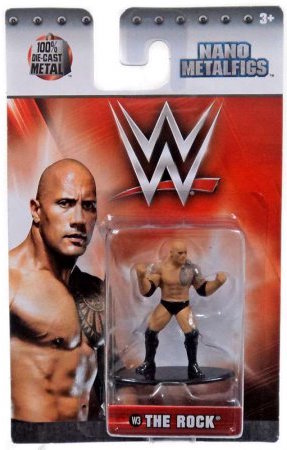 These toys are less than $1 — 97 cents to be exact at Walmart — and they’ve arrived in waves, meaning some of the names on the checklist on the back of the packaging weren’t on the peg because they haven’t arrived yet. The first 12 are here — The Rock, Undertaker, Sting, “Macho Man” Randy Savage, Roman Reigns, Charlotte Flair, Bayley, Chris Jericho, Triple H, Sami Zayn, Dean Ambrose and John Cena — and there are at least 12 more to come.

At less than $1 a pop — what can you get for that these days? — these seemed really appealing but I didn’t buy once I couldn’t find the one I wanted (because it’s not out yet) and moved on. But I noticed a number of the other brands all found as single-figure packages. (It turns out there are multi-packs, too, with five and even 20 figures all in one — and exclusive figures found only in those packs.)

For some reason these inch-tall figures reminded me of the potential of the simpler days of the 1980s where people collected on the cheap and kids could scrounge up enough coins to buy a pack of cards and see what they get. These aren’t blind-wrapped (yet), so what you see is what you get, but the chase element is there to collect them all. They seem like something that could be appealing to some kids as they’ll fit in their pockets and they’re cheap enough to set up massive mini displays for royal rumbles — or lose them, and it’s not the end of the world if that happens.

Some toy websites are trying to get as much as $10 for some of the figures — not sure how that’ll work unless some prove to be rarer than others over time — or if there’s growing interest in these, but some definitely are profiting off supply and demand here. And that under-a-dollar-starting point probably helps.

There are playsets, too, as well as more to come, but you can see what’s been made so far for everything — not just the WWE line — by clicking here.