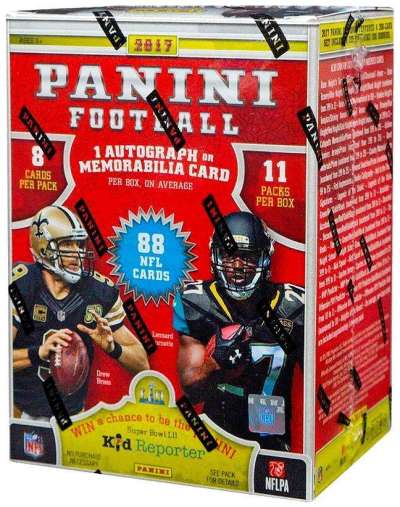 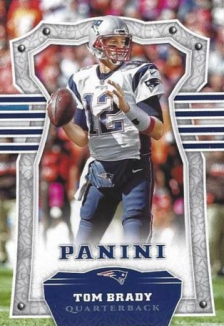 What’s Buzz-worthy: As said in a previous break of this one, this retail-only brand may get overlooked vs. other established lines from Panini America but it just might top them nearly every time if they’re consistently like this box. A ton of inserts with stars from the past and present, a bunch of rookies (both big and obscure), inserts and base with something to say (but oddly no stat lines) help make this a super-affordable but still-appealing set to consider ripping into. There is a guaranteed hit in every blaster here — this one included a young non-rookie standout — and there are autographs possible. On the checklist are names such as Mitchell Trubisky, Deshaun Watson, Leonard Fournette, Christian McCaffrey, Andy Dalton, A.J. Green, Jameis Winston, Andrew Luck, Ezekiel Elliott, Matt Ryan, Eli Manning, Matthew Stafford, Aaron Rodgers, Derek Carr, Drew Brees, Antonio Brown and so many more. Among the memorabilia cards? Amari Cooper, Todd Gurley, Adrian Peterson, Barry Sanders, Dan Marino, Bo Jackson, Earl Campbell, Jim Kelly, Warren Moon, Peyton Manning, Brett Favre, Deion Sanders, Dak Prescott, Elliott, Trubisky, Fournette, and so many more. The card backs here are well-developed visually, too, perhaps moreso than other brands, helping give it a feel that’s far above what you’d expect for the price. It’s definitely worth ripping.

Product Grade: A-
Box Grade: A
Fun Grade: A