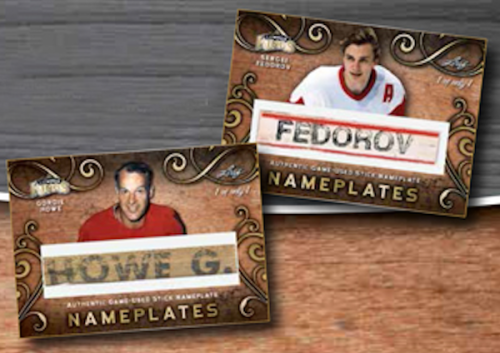 What’s buzz-worthy: Leaf sticks to the game plan that worked pretty well last year with another look back to the past with nothing but hockey sticks being the sources of memorabilia cards in this release, which promises “added themes and even more value than last year.”

The Basics: There will be fewer than 150 cases made for this one, which will include at least 11 types of stick cards. There will be 500-goal club members, Goalie Lumber, Fantastick Four, Double Twig Sigs, Game-used Lumber, Family Sticks, Nameplates, Legendary Lumber Team. Lumber Team Captains, Triple Blade, Original Sticks and Triple Blade. Among signers teased for this one? Gordie Howe, Bobby Hull, Mario Lemieux and Manon Rheaume.