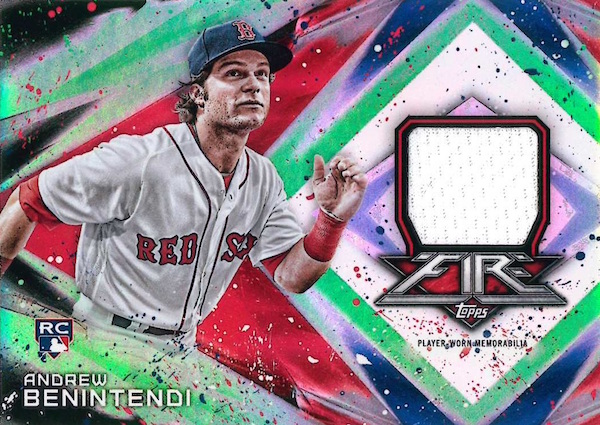 The Basics: Blaster boxes of this one will include Gold Minted parallels, while jumbos include Blue Chip parallels of a base set that consists of 200 cards — a mix of past and present players. The set also will have Onyx, Flame, Orange (/299), Green (/199), Purple (/99), Magenta (/25) and 1/1 Inferno parallels. … Insert sets will include Fired Up, Golden Gloves, Monikers, Flame Throwers and Walk it Off. … The Relic lineup is simple with just one set, Fire Relics, and then an autographed patch set to go with an autograph set, a dual-auto (/20) set and a triple-auto (/5) set. The standard autos will have Green (/75), Purple (/50), Magenta (/25) and 1/1 Inferno parallels. … Auto Relics will have Magenta (/10( and 1/1 Inferno parallels, while standard Relics will have four — Green (/75), Purple (/50), Magenta (/25) and 1/1 Inferno.  … Rookie Cards of note here will include Matt Olson, Aaron Judge, Andrew Benintendi, Yoan Moncana, Cody Bellinger and Alex Bregman. … Notable autos in this one will include Judge, Mike Trout, Bryce Harper, Bellinger, Carlos Correa, Ernie Banks, Greg Maddux, Hank Aaron, Kris Bryant, Ken Griffey Jr., Manny Machado and Sandy Koufax to name a few. … You can see everything on the checklist linked above.