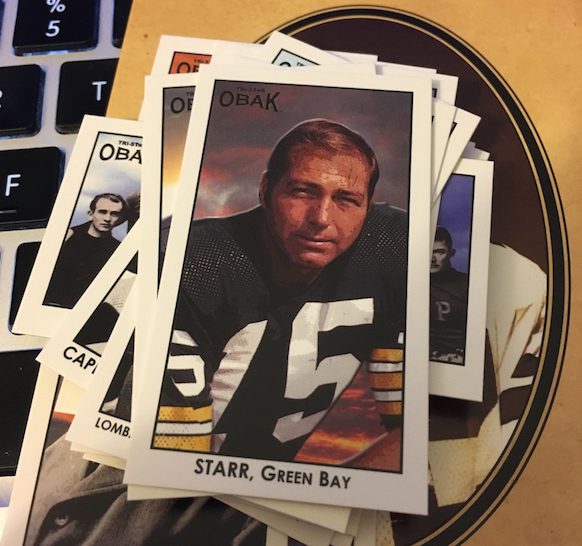 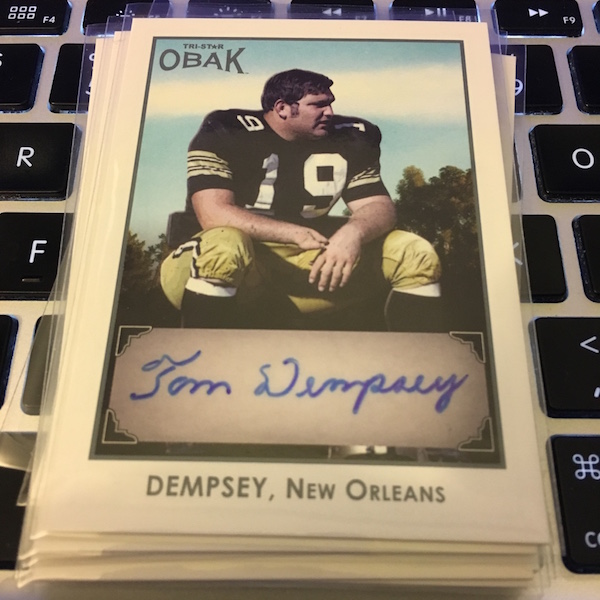 What’s Buzz-worthy: This brand only hit the gridiron once but it’s a pretty comprehensive look at some of the greats of the college game as well as the professional ranks with a retro style and plenty of quirky inclusions. Like its baseball counterpart, its base set is comprised of several  subsets of significant players as well as legendary trivia question answers. First a rundown of the subsets — First Hall Class, College Hall of Fame, No. 1 Overall Draft Picks, Famous Nicknames, Football Firsts, Behind The Name, History’s Greatest Players, U.S. Presidents, Heisman Winners, Game-changers, Heroes & Legends, Can You Believe and Serving Our Country. Who created the Wishbone or screen pass? They’re in here. Who invented the first helmet? He’s in here. And so are so many legends you do know. Each box includes four autographs (one via a cut — this one’s made me chuckle) and this box included some good names, but not necessarily super-expensive ones. For years, Tom Dempsey held the NFL record for the longest field goal and he’s still known for his foot — he was born without toes and wore a modified shoe. Another auto here? Hall of Famer Mel Renfro. The insert lineup here includes minis and parallels just like the baseball release — and this collector was satisfied with the names in that set (many of the biggest names) while the Serving Our Country military subset is one that’s very unique and this one delivered some strong names, including NFL Purple Heart recipient Rocky Bleier. The baseball release of Obak was the third and some of its best cards were done before its 2011 release, this football one — the only one — packs it all into one spot. Just 1,800 serial-numbered boxes were made so ripping into boxes of this one aren’t getting any easier, despite the fact that it’s not even a decade old. If you like football history, this might be the best possible set ever made examining that.