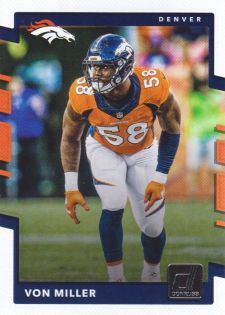 The box: 2017 Donruss football cards (Mega Box)
Where to buy: BlowoutCards.com (for hobby)

What’s Buzz-worthy: I like this one … so heres another. As previously said here, y’u’ve seen 2017 Donruss NFL ripped in a few formats this year since it’s a readily available, variety-packed brand that includes plenty of the big names from the past, present and future all in one place. What you might have missed is the recent arrival of the Mega Box, which is basically a blaster with three hobby packs included. The standard blaster was the least of my favorite rips of this one this year and the jersey hanger boxes ($15) are still a favorite but the allure of these Mega Boxes with hobby pack potential has gotten my attention. So far, all but one I have ripped has included a numbered insert — but no hits. These aren’t the flashiest rips, but I think they’re far stronger than the blasters with literally double the inserts (at least based on those I’ve ripped) with the potential for more. The Bronze parallels are the only cards exclusive to these but the hobby packs could include some of the better stuff found in hobby — and that just might keep me ripping.

Product Grade: B
Box Grade: A-
Fun Grade: A