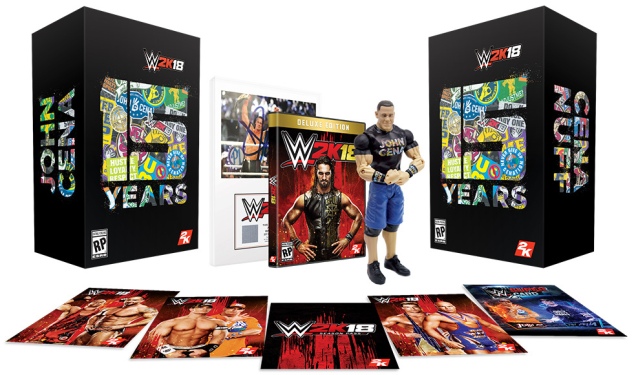 Wrestling fans who are gamers probably know all about the arrival of WWE 2K18 on Friday, but there’s a collecting angle that’s part of at least one edition of the game.

It’s the (John) Cena Nuff Edition that arrives with a personally autographed print that is grouped with a piece of match-used ring mat from his record-tying 16th championship-clinching victory.

Cena signed about 1,000 autographs every 30 minutes or so during several sessions over a three-day span leading up to the release of the boxed set — 25,000 autographs in all — as part of the $150 release that drops tomorrow.

The WWE was there to document the signing earlier this year in advance of the release for the PS4 and Xbox One — check out the video above.

“This is easily the most I’ve ever signed my name,” he said in the video. “I hope the folks that play the new 2K release and get the special-edition photograph are ecstatic.”

Cena has been a regular signer for WWE trading cards during his 15-year career but they’re not super-plentiful cards. He has less than 130 different certified autographs signed since his first auto in 2005 Topps Heritage WWE.