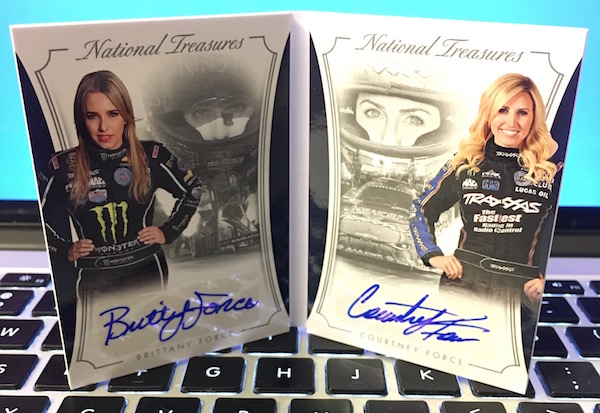 The days of “something for nothing” are as gone as 45-cent wax packs in today’s card world, but group breaks via outlets such as BlowoutTV can offer up some surprises. 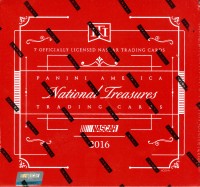 Particularly when high-end products go lower-end in price — or at least as low as they can go — and that’s where group breaks help out a lot.

One such example? The 2016 Panini National Treasures release, which is selling at less than half of its original price — but with plenty of the big cards still in there as they were when it was packed out last year. 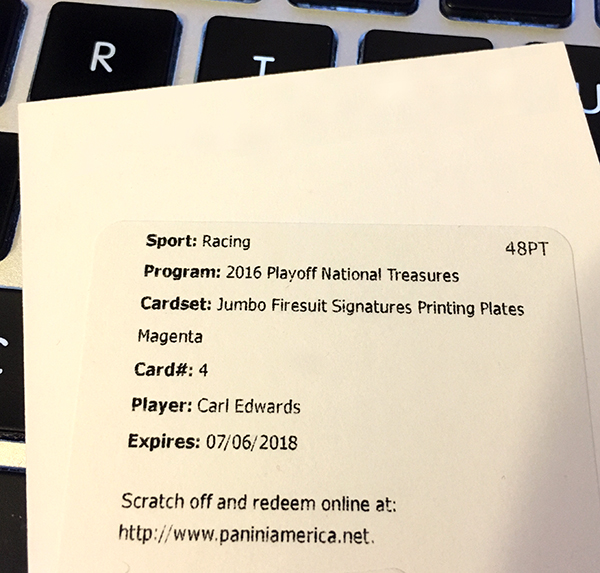 Every box of this one includes seven cards — all hits except for one base or parallel card — and there’s a booklet in every box, too. Some booklets include multiple autographs such as the Brittany and Courtney Force combo seen above or booklets with autos and jumbo patches. Some of the most-impressive cards in racing card history can be found here — as well as the biggest names from the past and present. 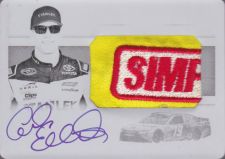 The two particular cards seen here? They were pulled from BlowoutTV boxes in recent breaks and if you do the math they were had for just over $30 apiece. The Force duo is limited to 25 copies and has sold for $73 recently on eBay and $100 in the past on COMC.com. The Edwards above has been redeemed and should be about a $50 card depending on the swatch. The black plate (right) fetched $52 with plenty of bidding when it finished on eBay a week ago.

These weren’t the greatest cards pulled during a recent day of NT breaks on BlowoutTV as hit drafts, but they were among those that this collector picked up. Not all breaks will be wins — sometimes you might get stuck with a base/parallel card depending on your draft spot — but this collector took part in a number of hit drafts (one hit per spot in box or a pair of boxes) and ended up with a total of three 1/1s (two signed), two other memorabilia cards and an auto for Hall of Famer Rusty Wallace for a little more than the price of a box now. I could have ended up with two booklet cards — passed on a Wallace-Brad Keselowski auto book for a plate auto — and, more painfully, saw a few Dale Earnhardt Jr. and Jimmie Johnson autographs and even a Richard Petty pass me by in those breaks.

2 thoughts on “When can group breaks get really good? When high-end dips in price …”