Do you like Buzz Breaks? Today’s your day then as we launch 12 in 12 — a series of a dozen breaks of past wax boxes and wax packs in a dozen hours. We’ll post one every hour all day long … and this is Hour 9.

The pack: 1985 Topps The Goonies
The cost now: $3
The cost then: Pocket change 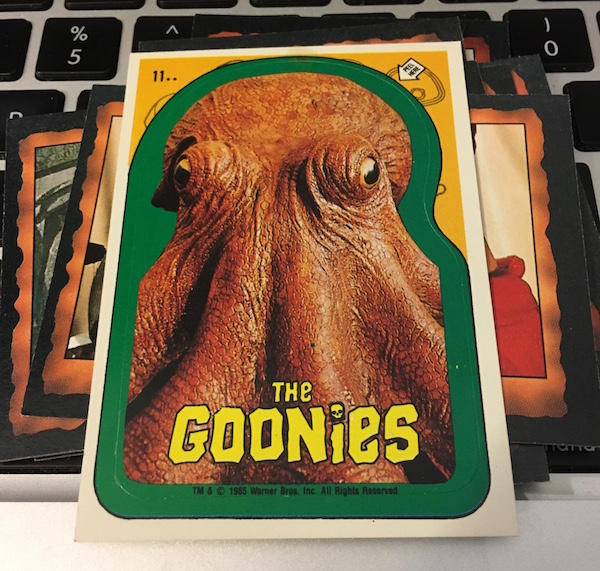 Autographs/Memorabilia: Nope, but had Data been in charge of product development they’d be in there with some booklet cards, holograms, diecuts — and no redemptions. 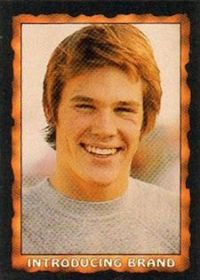 What’s Buzz-worthy: This classic film brought to life by Richard Donner, Chris Columbus and Steven Spielberg has only made its way onto cardboard once, though it’s got a serious following and a number of relatively big names on the cast — Sean Astin, Josh Brolin, Corey Feldman, Martha Plimpton, Joe Pantoliano and even former NFL player John Matuszak. Like other past Topps sets from that time, we’re just talking stickers and a base set here with the set leading off with character cards and then telling the story via various scenes. There are some back differences to be found among the stickers but otherwise this is a simple rip. Boxes and packs don’t seem to be as plentiful as other sets from around the time so the price on this pack was a tad higher than others you’ll see today. While this pack included a duplicate (two Chunks) it still included a mix of characters, story scenes and even behind-the-scenes views found in the set. There was damage due to the gum on one of the more-interesting cards (Matuszak getting into make-up as Sloth) but there was a group shot and a card of Ricky Roper (aka “Data”) to make up for it. There wasn’t a Cable, err Brolin, “Rookie Card” here but as you can see above it’s in there. If you can find a set that’s cheap and clean (black borders are an issue here and that’s about the only bummer), it’s worth grabbing. Building via packs could be a challenge unless you find a clean box. That could net you about four sets and a sticker set if collation works out as it should.

Product Grade: A-
Pack Grade: B+
Fun Grade: B

What’s next? Be back at the top of the next hour …