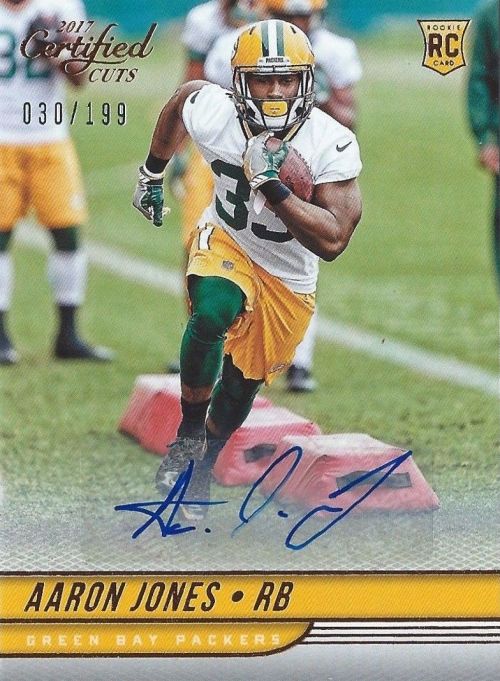 With Leonard Fournette out due to injury, Deshaun Watson on a bye week and Kareem Hunt on Thursday night, yesterday’s NFL action was a stage primed for a new rookie arrival or two.

Green Bay Packers RB Aaron Jones put up his best game of the season on Sunday with 17 carries for 131 yards and a touchdown while the spotlight was on QB Brett Hundley playing in place of Aaron Rodgers. Jones also caught three passes for seven yards. This fifth-rounder out of UTEP actually had a 125-yard game in Week 5 and a score in that game, too, but that was all lost in the glow of Rodgers’ fourth-quarter comeback win-sealing TD against the Cowboys.

Jones appears on fewer than 100 different football cards so far in 2017 releases and has a modest number of autographs that are only found in Absolute, Certified Cuts, Leaf Draft, Gold Standard and Unparalleled. That sounds like a lot, but in reality it’s nine cards in Unparalleled and no more than five (and mostly three) in others. That’s not a lot when he’s in the spotlight. (Update: He’s also in Prizm, which arrives this week.)

The second rookie who wowed on Sunday — the guy who single-handedly won the game for the Chicago Bears — was DB Eddie Jackson. Per the Elias Sports Bureau, he’s the first player in NFL history to score two 75-plus-yard defensive TDs in the same game. He recovered a fumble by Panthers QB Cam Newton and returned it 75 for a TD before he intercepted a Newton pass and returned it 76 yards for his second. The final score? Bears 17, Panthers 3.

As a former Alabama Crimson Tide standout, Jackson has quite a few more cards than Jones — he’ll top 100 total cards with the next new NFL arrival and he’s got nearly 50 certified autos right now. The difference here? Most of his cards in 2017 releases show him in his school colors. He’s got more than a dozen in Elite Draft, more than 10 in Contenders Draft, more than 10 in Prestige and then nearly that many in Unparalleled and just two in Leaf Draft.

Jackson was a fourth-rounder and, of course, is on defense, so there may not be as much received demand for him to spark card companies to include him in products across the board. Could there be more games like this in his future? Probably not — but there will be a lot more demand if stuff like this continues.

Another rookie who had a strong showing on Sunday? Tampa Bay Buccaneers TE O.J. Howard, who caught all six passes that came his way for 98 yards and two touchdowns in a close loss to the Bills. Entering the game he had five catches and just one touchdown all season.

Howard, also a standout for Nick Saban‘s championship-contending program, was one of the players at this year’s NFLPA Rookie Premiere and it shows with his cardboard. He’s already got more than 900 different cards and more than 500 different certified autograph cards. Needless to say, he’s appeared in virtually all card sets released this season and should have plenty more to come.