The box: 2017 Topps Gallery baseball cards (collector’s box)
Where to buy: Initially only at Walmart 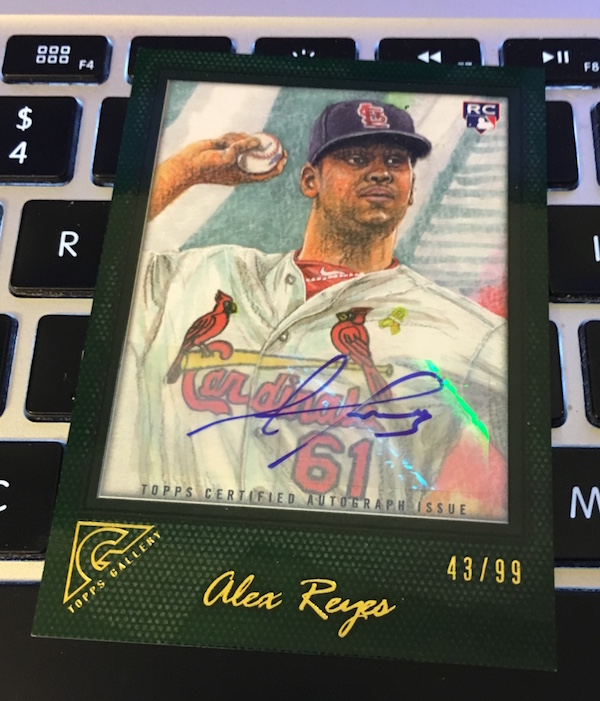 What’s Buzz-worthy: This Walmart-only release was unveiled by Topps today and is on shelves already, too, and that is were this one was found. This box wasn’t super-flashy with a single wowser card, but the Green autos are found one in every 69 packs, while the Blue Masterpieces are one in every 247 packs, so this box isn’t the norm. The base cards are all illustrations by Mayumi Seto and, for the most part, this is a set that is among the best art-driven releases I’ve seen. Since these are done by hand and not simply a Photoshop job, a few of them have likenesses that aren’t as sharp as others (seen to a degree in the rookies) but that’s probably due to the action photos that they were modeled after in some cases. As noted here earlier today, the autograph list here is huge but I’d argue that, while those biggest names will be rare and are solid finds, the biggest draw here are original paintings and sketches. The paintings are one in every 41 boxes (820 packs), meanwhile, sketch cards are one in every 2,931 packs. All artwork on the cards seen here is by either Seto (base set) or paintings by Dan Bergen (inserts). It’s unclear whether all art cards in Gallery are from them or from others, but it’s a solid chase considering the art presence here. (I’d bet that the original art is the pieces you see on the cards.) This wasn’t the flashiest box, but for its price — $69.99 — a two-auto experience with more at retail is still a win. The checklist is stacked with Rookie Cards — more than one per pack here — and there are rookie autos aplenty here, too. All in all, it delivered well statistically but the grade here is more for the overall feel of the break and not totally on single inclusions. There will be better boxes out there — and I’ll probably do another here soon if it presents itself.

Product Grade: A
Box Grade: A-
Fun Grade: A