Do you like Buzz Breaks? Today’s your day then as we launch 12 in 12 — a series of a dozen breaks of past wax boxes and wax packs in a dozen hours. We’ll post one every hour on the hour all day long today … this is Hour 7. 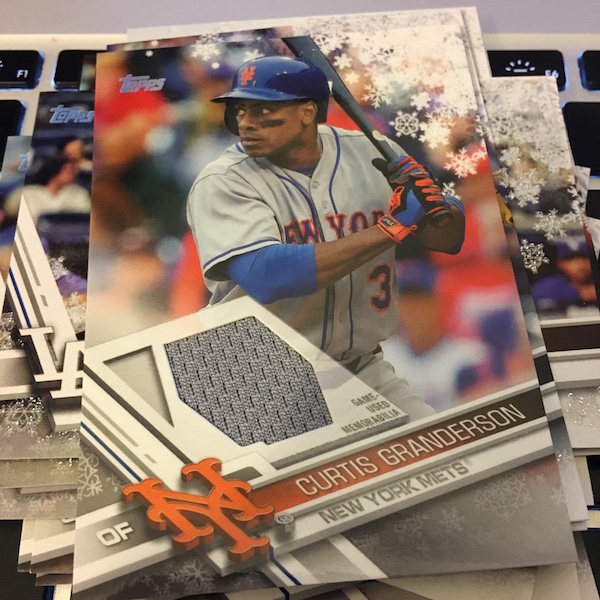 What’s Buzz-worthy: As said in a previous break of this one here, Topps’ Holiday brand arrives for another season with the same approach and the same general aesthetic — snowflakes applied to the basic Topps flagship design. This set includes notables from all three Topps flagship releases (Series 1, Series 2 and Topps Update) and has some big ink possible, too. Click here to view the final checklist for the release. The biggest rookies weren’t found here in the base set but it wasn’t shabby — it just wasn’t as interesting as last year when this collector busted several of these. (Some kind of small addition seen in every box this year would have been better.) This box delivered just as it should have with five parallels and the Relic. Rarer pulls include parallel Relics, Auto Relics and parallels, standard autos and parallels. You can see the odds in the gallery below. These are a fun option at retail with a hit in every box and statistically, pulling any particular parallel isn’t easy — one in 40 boxes — so those should hold some extra interest over time. One common card to watch for? The card of Rangers pitcher Cole Hamels, card No. 107, which is an unintentional short-print due to a production error. It has sold for as much as $57 to those wanting — badly — to complete their sets.

Product Grade: A-
Box Grade: B
Fun Grade: B