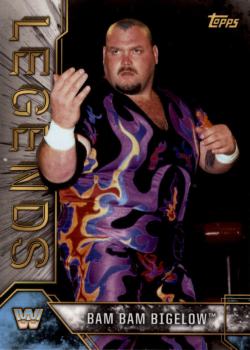 The box: 2017 Topps WWE Legends
Where to buy: BlowoutCards.com

What’s Buzz-worthy: This retro-only release has a simple-yet-busy design that feels more modern than legendary, but it delivers the hits pretty well with four in an overall 12-pack box. The mini-box format helps collectors get a shot at two hits for less money, and half of the time that will include two autos since there are three autos guaranteed per overall box. This one included three WWE Hall of Famers from recent years — not all signers in this one are actually Hall of Famers — and two of those are rarer parallels. (On the Michaels card it’s the word “Legends” that notes the parallel color … so basically pay attention to the serial-numbering on those.) The Silver autos are one in every 41 packs, while the Gold Relic auto is one in every 428 — that’s a find that even Mrs. Foley would be very happy with. Since a number of these signers aren’t regular inclusions, this one has some autos that will sell well and then others who might not, though they don’t have a lot of cardboard, either. That’s a risk worth taking with Legends. This box delivered very well overall and there’s still plenty more potential that could pop up in other boxes to top it. I’ll probably rip another in the coming weeks — because this box was strong enough to warrant it and there are even more inclusions to talk about later.

Product Grade: A
Box Grade: A+
Fun Grade: B+