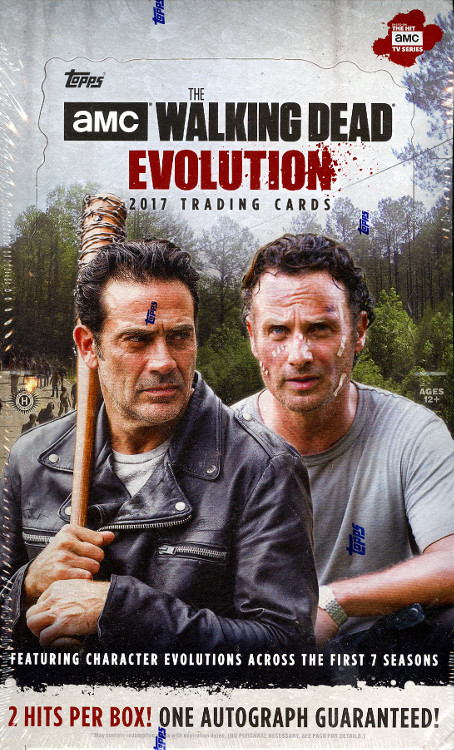 The box: 2017 Topps The Walking Dead Evolution (hobby box)
Where to buy: BlowoutCards.com

What’s Buzz-worthy: The last few Topps releases for The Walking Dead have treated this collector very well at retail 90 percent of the time so it may not be easy for a hobby box to wow me, but two autographs — both being parallels — isn’t a bad way to do it. The odds here are one in 75 for the Brown auto and one in 82 for the Green so they’re not impossible pulls but there’s only supposed to be one auto per box in most instances with the second hit being something from a mix that includes Relics, sketch cards and printing plates. Throw in a rarer Green base parallel of one of the series’ most-popular characters and this box gets an A. The rest of the box feels similar to what can be found in blasters — in fact, blasters have additional inserts not found here — but here you get the full set plus some and more volume in the inserts. Overall, this one keeps with the formula of the recent releases — but hobby boxes seem like there could be some added element of “other” type of insert card (something beyond a standard card) that could liven up these boxes a bit.

Product Grade: A-
Box Grade: A
Fun Grade: B