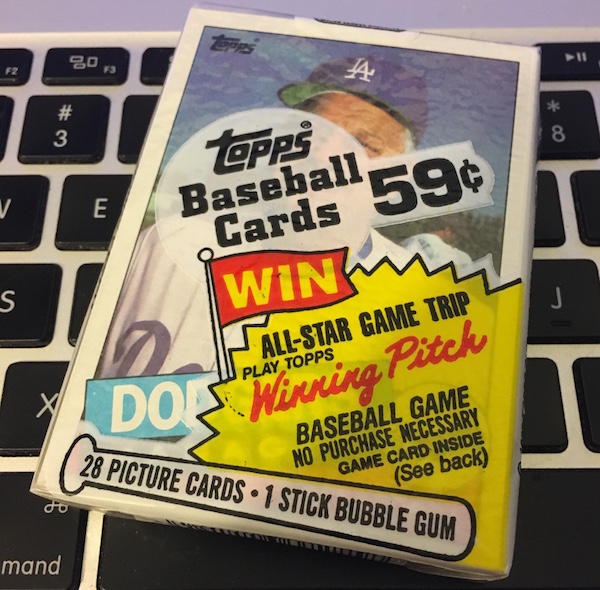 Do you like Buzz Breaks? Today’s your day then as we launch 12 in 12 — a series of a dozen breaks of past wax packs in a dozen hours. We’ll post one every hour on the hour all day long today … this is Hour 6.

Cards per pack: 28 plus one Winning Pitch contest card (see all in gallery below)
Base set completion:  28 of 792 (4 percent)
Duplicates: 0

What’s Buzz-worthy: A Hall of Fame manager, Tommy Lasorda, topped this pack, but that wasn’t going to stop me from tearing into this one in the search of Rookie Cards for Kirby Puckett, Roger Clemens and Mark McGwire and, to a much lesser degree, Dwight Gooden, Eric Davis, Orel Hershiser and Bret Saberhagen. What did I find? Not much other than Hall of Famers Rickey Henderson and Jim Rice and a Terry Pendleton RC Braves fans might (sorta?) like. The Henderson is probably the biggest card here, though its centering really isn’t grading-worthy. Ripping into these packs isn’t that fun because you’re ultimately ripping for one of the three big cards — which you can land for $6 or less if you’re not super-picky about condition. And much of the rest in packs can be disappointing due to sloppy cutting and dirty/washed out printing jobs. Over on COMC.com only the McGwire is challenging that pack price among raw cards — sad but true — but that doesn’t make these cards any less big in the world of 1980s baseball cards. If you collected back then — or even up into the late-1990s when McGwire singlehandedly made people thousands upon thousands of dollars for holding onto this wax — this is a rip that has some appeal. If you can land a high-grade specimen of a key rookie or iconic 1980s star, you might do well tearing into these packs, but it won’t be easy condition-wise.