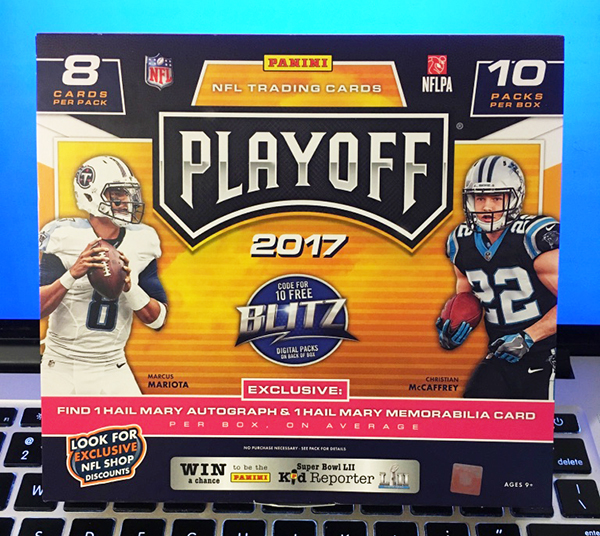 What’s Buzz-worthy: These $39.99 boxes deliver one autograph and one memorabilia card just like what’s in hobby boxes but with Hail Mary versions of autos and mem cards — cards that fall right in line with the other parallels here (First Down, Second Down, etc). These boxes seem stacked with inserts and more than half of the base cards here were of retired players and Hall of Famers, which seems odd but is comfortable. It’s also just as was seen in a hanger box break here previously. As said then, this is a brand that isn’t super-flashy but it doesn’t intend to be — this is definitely one for a collector who wants some modern touches without going to0 far — and it feels like it’s something beyond a basic release. You’ll find a lot more inserts here than in a hanger box but interestingly the Rookie Card mix is not that much higher (six in hangers, 10 in these boxes). If you’re a fan of 1990s Playoff football cards, then these should feel similar but with a new energy. And if you’re a fan of the 1990s players, you’ll find them here, too. The active-player assortment in the base set here wasn’t that great, but the inserts made up for things a bit, though this one didn’t seem as impressive as the previous box broken here. (Ironically, nearly all of the Rookie Cards were the same, too.)

Product Grade: A
Box Grade: B
Fun Grade: A