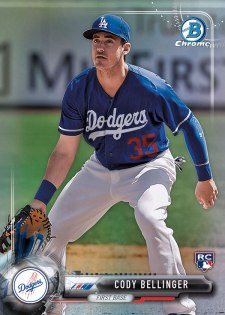 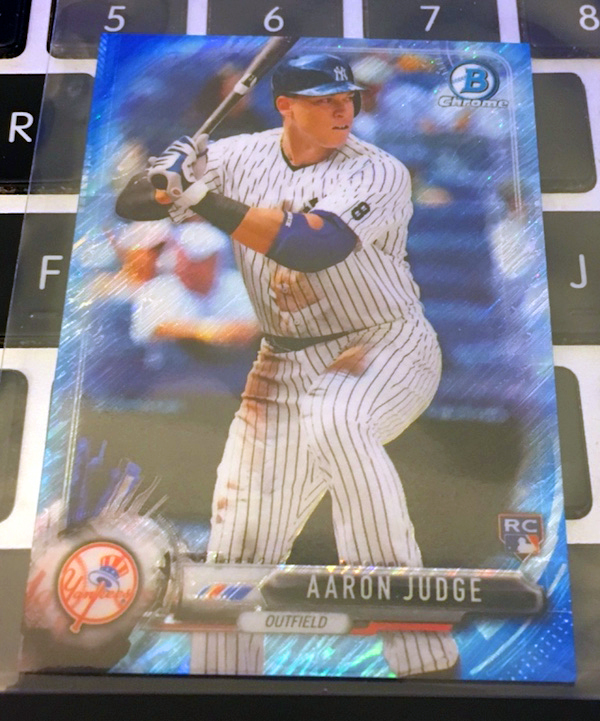 What’s Buzz-worthy: Blue Shimmer Refractors for the win. Aaron Judge and Alex Bregman made appearances in that color among the three bonus packs found here. This new format for the set is one that’s pretty appealing with an oversized set box including another vibrantly designed set box inside along with a wedged display for three mini packs where all the bonus cards are found. As mentioned earlier, this is a mini version of all rookies and prospects from 2017 Bowman and 2017 Bowman Chrome — it’s skip-numbered and the cards are all mixed within the set but it seems cleaner in both its printing and approach compared to past sets like this. Packaging the bonus cards away from the basic cards seems like a good move that will allow re-sellers to move a sealed set (the inner box is wrapped) if they only want the parallels. The assortment found here should be close to the norm as the only cards on the odds panels are Red Refractors (one in three sets), Superfractors (one in 21 sets) and printing plates (one in six sets). If you land notable names on those cards — or really any numbered parallels — you could do pretty well. If you’re one who doesn’t hit Bowman hard during the year, this is a good way to grab a set, get some of that chase and then get all the big names — just on smaller cardboard. I’d bet that the print run on these can’t be as high as standard Chrome cards, so that’s perhaps a longer-term plus, too. Although this is not intended to primarily be a “rip” it was a fun one.