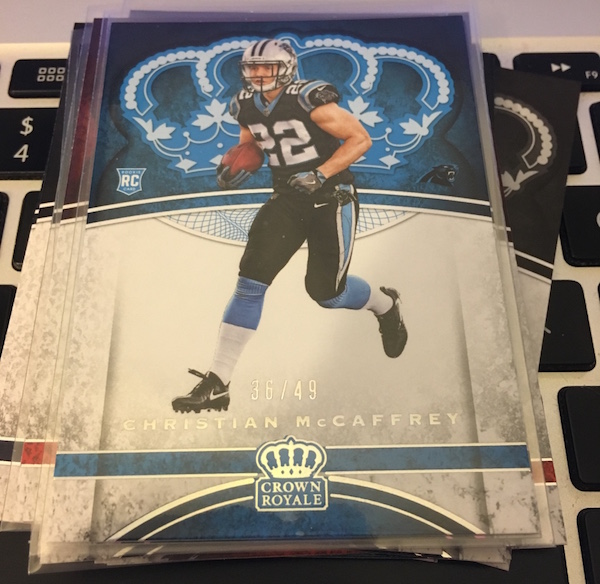 What’s Buzz-worthy: This collector hasn’t been wowed by Crown Royale in the past, but this box’s first pack included the start of what might — a Christian McCaffrey Rookie Card and the rarest parallel version of that possible in the product, a Platinum (/49). That may have been the biggest highlight right off the bat as the memorabilia card is one of a Rams WR who has not truly emerged just yet (but does have a touchdown this season) and my autograph turned out to be 150 Panini Rewards points. While that’s a bit of a bummer (mainly due to the $4.66 cost to ship the card — a lot of 150-point cards aren’t that expensive), I did manage to pick out a Hall of Famer’s autograph, a 2014 Panini Absolute Absolute Ink Ozzie Newsome (/50), from the more than 9,700 different cards available on the site for my points plateau. I actually like the Panini Rewards program but it doesn’t really help on grading a box. What I did see in this $40 box was a glimpse at what’s possible and there are some strong Rookie Cards and autos to be found here. The design of this one isn’t the flashiest, but the basic set is an easy build — 100 cards, 80 veterans and 20 standard Rookie Cards. The parallels include Bronze, Pink, Holo Gold, Light Blue and Platinum and that’s it with the autos and Silhouettes that only have Pink and Platinum versions here. If you’re wanting a couple of hits in a box and a chance to chase some solid rookies without spending too much, this is one to consider.

Product Grade: A-
Box Grade: B+ (thanks to the McCaffrey)
Fun Grade: B