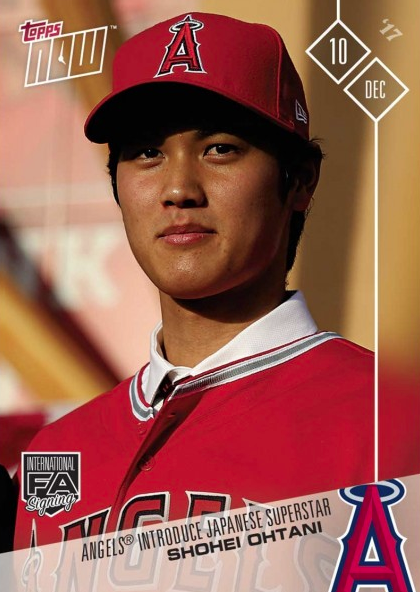 Los Angeles Angels star Shohei Ohtani will have autographs from the company in packs before spring training, according to a deal announced on Monday morning.

“Getting a deal with Shohei Ohtani was a priority for us because we want the best for our Topps fans,” said David Leiner, Topps Global General Manager, Sports & Entertainment. “Ohtani is a dynamic two-way player who has gained a lot of attention because of his incredible talent. We are thrilled to offer his trading cards and autographed cards to baseball fans.”

Terms of the deal were not disclosed, nor was it noted as an exclusive — just a “trading card and long-term autograph deal.” If he immediately begins his time in the majors with the Angels, which appears to be a lock, he’ll be eligible for any MLB products from the company, not just its Bowman prospect products. A debut product was not noted by the company.

“He’s an incredible talent that transcends baseball and we’re exciting for him to join a long list of great baseball players who have Topps Rookie Cards,” Leiner said.

As noted previously here on The Buzz, Ohtani will have autographs in 2018 Donruss packs from Panini America when it arrives in March.