Just like on football cards, everybody’s attention seemed to be on Tom Brady Sunday evening in Gillette Stadium.

Now part of that was due to the drama about the gash on his hand held shut by some stitches, but we all know that the drama of him and the New England Patriots potentially reaching another Super Bowl and possibly getting a record-by-himself sixth Super Bowl ring was a big deal, too.

That Super Bowl trip is happening with a 24-20 come-from-behind victory, and that’s because of two fourth-quarter touchdown catches from Danny Amendola, who might have the toughest Rookie Card to find of all the Patriots. 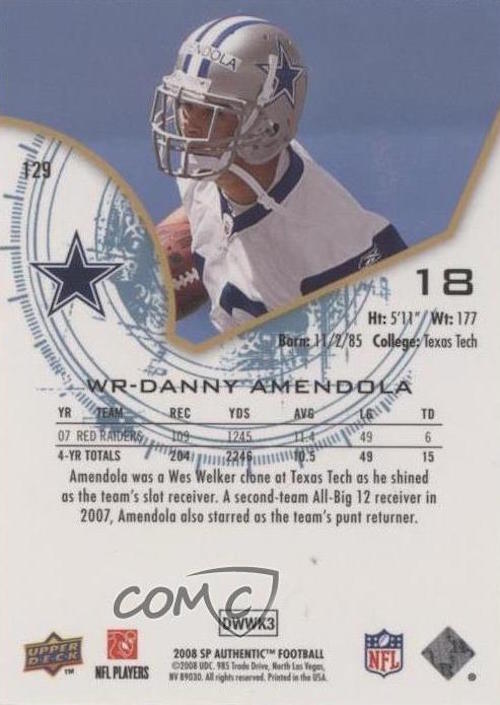 It’s because he has just a single Rookie Card and it’s limited to just 1,399 serial-numbered copies — and it was issued a year before he even played his first real NFL game. The set is 2008 SP Authentic and there he’s a member of the Dallas Cowboys. His first game? It came in 2009 with the St. Louis Rams after a stop in Philadelphia.

So how does a card of a guy who went undrafted and spent the season on a practice quad exist? Hard Knocks, the HBO/NFL Films reality show that follows players through the struggles we don’t see on Sundays. (He was part of the 2008 season that focused on the Cowboys.) The Rams signed him the following year and gave him his break and then in 2013 he signed a five-year $31-million deal with the Patriots. The rest is NFL history with two Super Bowl rings on his hand and potentially a third coming on Feb. 4.

Raw copies of this card have sold for as much as $62.99 on eBay in recent months and they’ve been steady sellers for between $15 and $45. Among active auctions, a pair of cards with bidding wars are in the mid-$30s with plenty of time to go, while Buy-It-Now prices range from $49.99 to $100.

Those aren’t quite Brady numbers — that guy has plenty of Rookie Cards to choose from (more than 40) — but this one is the only option there is for an Amendola fan.