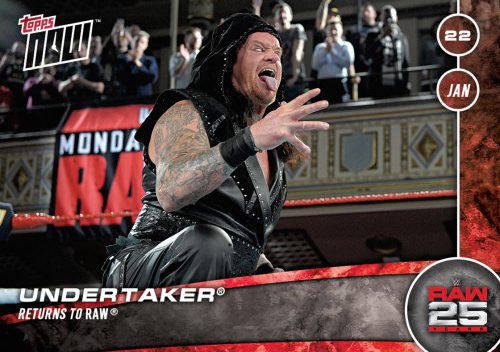 A big event for the WWE to kickstart its march to WrestleMania has spawned the first 2018 Topps Now WWE cards of the year after the 25th Anniversary of Raw last night in New York.

Four cards will start things off and are up for grabs for the next 24 hours in advance of this weekend’s Royal Rumble pay-per-view, which will likely see some additional returns of past greats just like last night’s nostalgia-filled special — and some additional cardboard next week.

The cards making up this Raw 25 wave include the returning Undertaker and Scott Hall, while The Miz winning the Intercontinental title and the match between John Cena and Elias also made the cardboard cut.

We’ll add any 2018 Topps Now WWE cards to the gallery below once they arrive.