The box: 2018 Topps WWE Road To WrestleMania
Where to buy: BlowoutCards.com 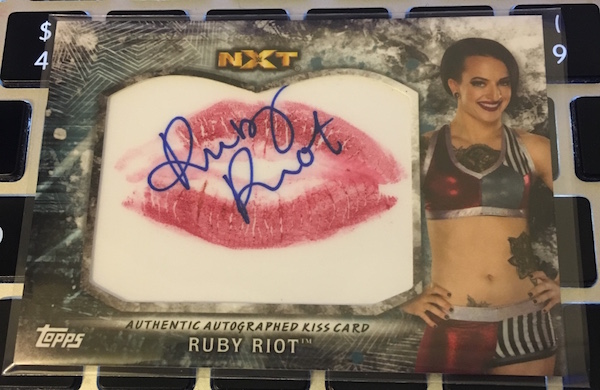 What’s Buzz-worthy: The first WWE release of the year recaps the last year or so with dated highlight cards making up the set just as the Road to WrestleMania begins on TV with this Sunday’s pay-per-view, the Royal Rumble, and its results directly affecting Mania later this spring. This set is very similar to last year’s with the highlights but there aren’t really any women’s wrestling highlights here, meaning they’re holding onto those for another women’s-focused set this year. About the only drawback here is skinny stock that could chip easily. This box included a Silver parallel (/25) found in every other box along with two autos of younger stars — one relatively established on the men’s side and a newcomer on the women’s side. The Kiss Card is one in every 445 packs and among those in this one are a first for any WWE cards as the eccentric Goldust has Kiss Cards here alongside the women’s stars. It’s a rare pull and a pricey one so far in early auctions. The Riot card might be pretty popular but Goldy will win because it’s just really, really different from the typical cards. On-card autos are a big plus here, too, with everything numbered except for the standard ink. This box was an A+ with the two hits and this one should make for a strong start for the WWE year as there will be a lot of hobby boxes with two autos for a not-so-expensive price.

Product Grade: A
Box Grade: A+
Fun Grade: A-