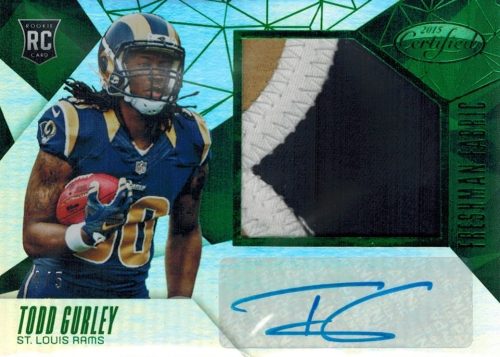 The showdown between the New Orleans Saints and the New York Giants turned into an old-fashioned huck-it-chuck-it shootout that fueled more than a few fantasy teams and probably more than a few searches for football cards online.

But it was St. Louis Rams rookie running back Todd Gurley who made history Sunday with an NFL-leading 133 rushing yards and a touchdown to become the first rookie to run for more than 125 yards in his first four starts. Meanwhile, the Rams are 4-3 — and that’s a team that hasn’t finished a season with a winning record in 12 years.

The 10th overall pick in this year’s NFL Draft can be found throughout all 2015 football products and his rarer premium cards like the Certified patch auto above from Panini America have been scorchers. That one’s pushing $200 on eBay right now with plenty of time remaining. Meanwhile, there have been more than 250 sales of Gurley autographed cards to top $100 in recent times on eBay and asking prices for active auctions are even more stout.

Keep reading for nine more players who generated some buzz on the field — and why — this week.