ABC News Political Director Rick Klein offered his thoughts on the Decision 2016 trading cards here on The Buzz last week. Today he was able to show Republican candidate Ted Cruz and his wife, Heidi Cruz, their cards from the product.

What did they say when they saw the cards? Check out a video after the jump.

END_OF_DOCUMENT_TOKEN_TO_BE_REPLACED 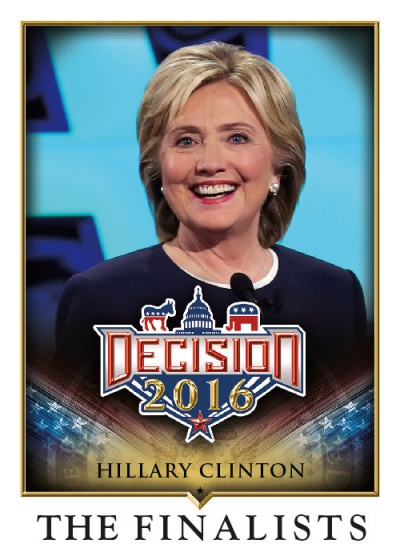 Politicians have appeared on cardboard since the earliest years of trading cards — you know, in packs of cigarettes back in the 1800s — and they’ve appeared in countless non-sports, war and even sports sets of the last 30-plus years as collecting emerged upon the national psyche and flourished as part of the pop culture landscape.

But the new Decision 2016 trading cards arriving this week include something that we haven’t yet seen in a political release — the chance at autographs and more advanced “hit” cards along with a healthy amount of traditional cardboard.

In the midst of one of the most-tumultous political seasons in years, this is a product that offers a promising start for a perhaps-expanding trading card genre of its own — and the potential for something more.

It already appears to be a landmark release, but don’t just take Buzz’s word for it.

“The idea of a set that captures that drama of an election – that is compelling,” said Rick Klein, who is ABC News’ Political Director and also a long-time baseball card collector. “I feel like it’s something that could start as a novelty project but catch on. You’d be surprised by how many political junkies are also collectors. People love pins, hats, signs. I’ve seen autograph-seekers at obscure conferences for senators most people could never name.”