SCP Auctions will auction a Heisman Trophy next month and all net proceeds from the sale will be donated to CTE research.

END_OF_DOCUMENT_TOKEN_TO_BE_REPLACED

Rashaan Salaam, the winner of the Heisman Trophy as the top college football player in the country back in 1994, died on Monday and was found in a park in Boulder, Colo. He was 42.

The former Colorado Buffaloes star rushed for 2,055 yards and 24 touchdowns in his final college season before playing four years in the NFL. The Chicago Bears took him with the 21st pick in the 1995 NFL Draft and as a rookie he rushed for 1,074 yards and 10 touchdowns. He added just 610 yards and three scores the remainder of his career, which ended as a member of the Cleveland Browns in 1999.

END_OF_DOCUMENT_TOKEN_TO_BE_REPLACED

The Heisman Trophy is one of the most high-profile awards in sports, and its winners’ autographs are a coveted niche for fans who focus on football.

Steiner Sports knows this and has launched a new line of Heisman Collection autographs, a lineup that includes group-signed helmets as well as single-signed pieces from 23 past winners.

END_OF_DOCUMENT_TOKEN_TO_BE_REPLACED 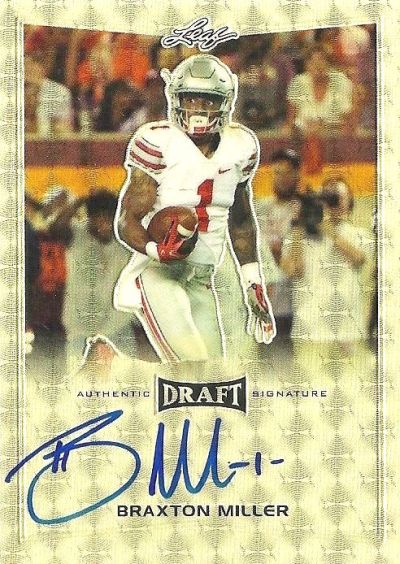 Today may be Pro Day for the Ohio State Buckeyes, but Urban Meyer‘s top stars are already being found somewhere else besides the NFL.

They’re on eBay and on 2016 Leaf Metal Draft football cards after the brand arrived this week packing five autographs per box.

END_OF_DOCUMENT_TOKEN_TO_BE_REPLACED

Stanford’s Christian McCaffrey picked up The Associated Press College Football Player of the Year nod on Tuesday, becoming the first non-Heisman Trophy winner since 2009 to win the award.

But if you want his first football cards? Well, you’ll have to do some digging — because six years ago was the same year he made his debut on cardboard.

END_OF_DOCUMENT_TOKEN_TO_BE_REPLACED

Two of the top Heisman Trophy candidates this year already have cardboard and certified autographs thanks to the U.S. Army All-American Bowl sets from Leaf Trading Cards.

Alabama junior Derrick Henry set the Crimson Tide’s single-season rushing record in a dominating 271-yard, 46-carry day against the rival Auburn Tigers on Saturday. Ohio State’s Ezekiel Elliott also put up a dominating 214-yard day with a pair of touchdowns in a rout of the rival Michigan Wolverines.