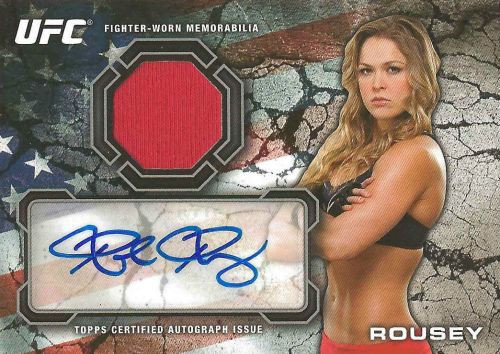 It’s February and that means that we’re set for the Super Bowl and some mass-marketing from SI.com over the annual Sports Illustrated Swimsuit Issue.

And in reality the hype for both already has begun.

The last time we saw Ronda Rousey, she was suffering the first loss of her UFC career. Up next she’ll be in the annual issue for the second year in a row. More publicity won’t hurt her already-in-high-demand cardboard. She’s one of a long list of athletes to appear in the issue and part of an even longer list of models who appear on cards and have certified autographs and even memorabilia cards for collectors to chase.

For the traditional models, there actually were SI Swimsuit card sets released each year from 2003 to 2009 from Stellar Collectibles and then a later retrospective set. In those sets, we got autographs, memorabilia cards and even paint cards from photoshoots. Meanwhile, for many of the athletes who have appeared in the issue since, there are autograph appearances in sets like Topps’ Allen & Ginter (and many other sets) where collectors can also sometimes find the models. Kate Upton and Chrissy Teigen have been found there for example, and they sell very well.

Here’s a rundown of a few sports stars who we’ve seen in the issue.