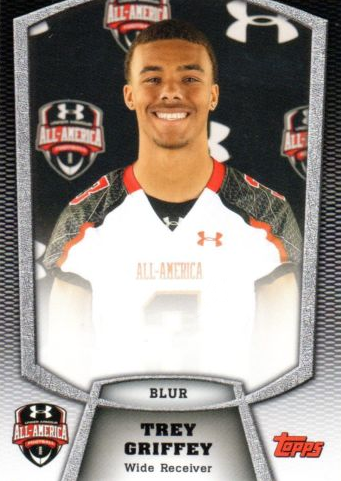 The newest member of the Miami Dolphins has a famous family, but it’s likely you don’t have his first football card.

He’s Trey Griffey — the son of baseball Hall of Famer Ken Griffey Jr. — and no matter how his NFL career goes he’s already got a Topps football card.

END_OF_DOCUMENT_TOKEN_TO_BE_REPLACED

We’re down to the last 12 NFL teams and that means we have just one question for the remainder of the football calendar.

There are many sports cards sets out there from the past that aren’t valuable in the financial way at all but they can carry some intrinsic quality that should just resonate with some collectors anyway.

Maybe it’s just because Buzz ripped these packs in the past — or maybe because they are just so much more different than anything made in the years since — but one set that feels that way for me is 1992 Pro Line Portraits. It’s a football card set that’s simple — portraits on the front — and oddly non-statistical with thoughts from the person on the back. Most are football players, but some are players’ wives and others are celebrities who have a fondness for the game. One of those people, for example, is Muhammad Ali and you can see his Team NFL insert card (No. 1 in the set) above. The biggest draw of these back then? There was an autographed card guaranteed in every box.

For a simple Sunday item — call it a Sunday Six — here’s a look at six fun cards from the product.

END_OF_DOCUMENT_TOKEN_TO_BE_REPLACED 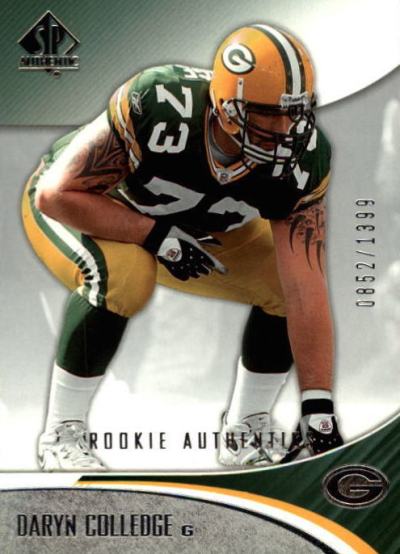 A former Green Bay Packers lineman has opted to enlist in the Army National Guard, and, unlike many of his brothers on the offensive line, he has football cards for collectors to consider.

He’s Daryn Colledge, a 34-year-old, nine-year veteran of the league who was a member of the Super Bowl XLV-winning Packers. He started 137 games in his NFL career, also playing for the Arizona Cardinals and Miami Dolphins.

“After all my time in the NFL, traveling, meeting and supporting the troops, I’ve decided to step up and stand shoulder-to-shoulder with them,” he said on Twitter. “This was not a decision made lightly. We live in an ever-changing world and at this time in my life I feel it is best-served with me in defense of my family, state, country. With the support of my family [and] friends I look forward to the work and road ahead.”