With Leonard Fournette out due to injury, Deshaun Watson on a bye week and Kareem Hunt on Thursday night, yesterday’s NFL action was a stage primed for a new rookie arrival or two.

Green Bay Packers RB Aaron Jones put up his best game of the season on Sunday with 17 carries for 131 yards and a touchdown while the spotlight was on QB Brett Hundley playing in place of Aaron Rodgers. Jones also caught three passes for seven yards. This fifth-rounder out of UTEP actually had a 125-yard game in Week 5 and a score in that game, too, but that was all lost in the glow of Rodgers’ fourth-quarter comeback win-sealing TD against the Cowboys.

Jones appears on fewer than 100 different football cards so far in 2017 releases and has a modest number of autographs that are only found in Absolute, Certified Cuts, Leaf Draft, Gold Standard and Unparalleled. That sounds like a lot, but in reality it’s nine cards in Unparalleled and no more than five (and mostly three) in others. That’s not a lot when he’s in the spotlight. (Update: He’s also in Prizm, which arrives this week.)

END_OF_DOCUMENT_TOKEN_TO_BE_REPLACED

There were surprises and new arrivals on the NFL rookie front — and that’s just Week 1.

Six newcomers stepped up with none perhaps more surprising the Kansas City RB Kareem Hunt, who helped the Chiefs pull off a dominating 42-27 win over the defending Super Bowl champion New England Patriots on Thursday night. He had 17 carries for 148 yards and a touchdown — and seven catches for 133 yards and a 75-yard score. Not bad for a third-rounder out of Toledo.

As you should already know from last week, he already appears on more than 450 different cards with nearly 300 of those being certified autos. He’s got 15 RCs so far by the standard (non-insert) definition and nearly 140 memorabilia cards and is found in most 2017 releases — just like most of our other notables from Sunday.

Who made the cut? Keep reading.

END_OF_DOCUMENT_TOKEN_TO_BE_REPLACED 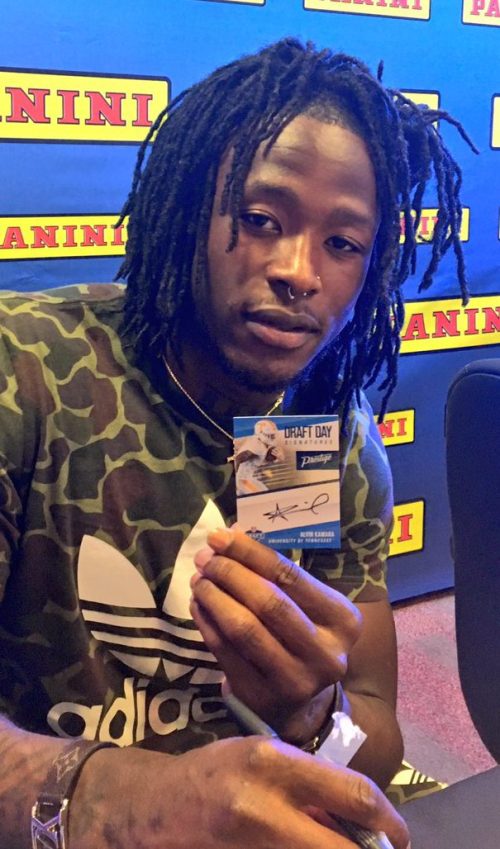 NFLPA Rookie Premiere kicks off today in Los Angeles and the first glimpses of the autographing action are in.

Your first signer of those images teased so far from Panini America is former Tennessee and future New Orleans Saints RB Alvin Kamara.

We’ve also got our first glimpses at 2017 Panini Origins, which will have Photoshopped action images of players in NFL uniforms that will be signed during this weekend’s event. Keep reading for a look.