It was 25 years ago this week that the comic book world changed a bit with the formation of Image Comics.

The new company brought us Spawn, The Savage Dragon, WildC.A.T.s. and Youngblood in its earlier days and The Walking Dead in later years.

As part of that anniversary, comic book shops around the country are celebrating Image Comics Day on Wednesday with some new arrivals from the company, which was created by Erik Larsen, Jim Lee, Rob Liefeld, Todd McFarlane, Whilce Portacio, Marc Silvestri and Jim Valentino.

END_OF_DOCUMENT_TOKEN_TO_BE_REPLACED 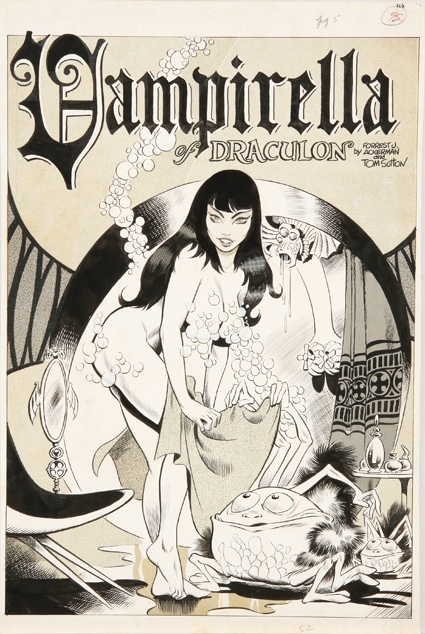 She’s Vampirella and the original art — the complete seven-page story — from Vampirella No. 1 is in the hands of Thomas Fish, the owner of BlowoutCards.com. The artwork previously sold in May 2009 after it had been in the collection of its creator, Forrest J. Ackerman all these years.

“During the last comic art con in Secaucus, N.J., I had an opportunity to meet the previous owner and discuss this historic first appearance piece of comic book and horror memorabilia,” Fish said. “After some negotiation, we were able to come to a deal we were both happy with and the artwork is now part of my collection.”

END_OF_DOCUMENT_TOKEN_TO_BE_REPLACED

Based on box office totals for Deadpool — $677.7 million and counting worldwide — there might be a few people looking for a piece of The Merc with a Mouth.

Sure, there are 25 years of comic book appearances to be had — and there are key issues that also can be found as graded books and as original art — but maybe there’s something else that you might want without the stresses of storage or breaking the bank.

That’s where Rob Liefeld comes in.

END_OF_DOCUMENT_TOKEN_TO_BE_REPLACED

Deadpool‘s $150 million showing at the box office this past weekend was a landmark moment for both R-rated movies and a potential game-changer for comic book films, too.

It set box-office records for its rating, records for its studio, records for its time of year and a few other fronts … and it all started for the character 15 years ago this month as The New Mutants was a Marvel Comics series that was winding down. Deadpool debuted in issue 98, which was called “The Beginning of the End Part 1” — the title’s final issue was just two months away.

The duo that created Deadpool was artist-writer Rob Liefeld and writer Fabian Nicieza — and their work was seen by many readers that month but many, many more when X-Force No. 1 arrived a few months later. One of those books is one of the hottest in collecting today —  Mutants No. 98 — while the other is one that collectors of the Polybag Era have stashed away in bulk. (Buzz is right there with a few dozen in a box somewhere.)

But what’s got to be hotter than the hot book for the hottest movie of the moment?

END_OF_DOCUMENT_TOKEN_TO_BE_REPLACED

Up next on the comic book movie hit list is Deadpool, a Marvel-inspired creation arriving on Feb. 12 that you’ve already probably seen a commercial for a few times here and there. (As long as you have a pulse … or a TV.)

Deadpool is a wise-ass who arrived in the Marvel universe in February 1991 via The New Mutants No. 98. That $1 book will cost you more now but the Rob Liefeld creation has many other appearances out there for fans to chase in all those years since.

His second appearance comes in X-Force No. 2 — everybody has X-Force, right? (Even Buzz has at least a dozen No. 2’s in storage somewhere to go with 30-some first issues … )

Since we’re close to the arrival, Buzz figured it was time for a vote — check out the latest trailer below and then tell us what you’ll do.