Not that long ago, Steven Holcomb‘s Olympic dreams were challenged by failing vision and depression, but a surgery to correct his keratoconus — a disorder that had him seeing with 20/500 vision — helped make him one of the United States’ most-successful bobsledders in years.

His successes included three Olympic medals and it was was one that had been documented in a book — his autobiography, But Now I See: My Journey from Blindness to Olympic Gold — but there won’t be new chapters. He was found dead Saturday in Lake Placid, N.Y., at age 37.

“The entire Olympic family is shocked and saddened by the incredibly tragic loss today of Steven Holcomb,” U.S. Olympic Committee CEO Scott Blackmun told The Associated Press. “Steve was a tremendous athlete and even better person, and his perseverance and achievements were an inspiration to us all. Our thoughts and prayers are with Steve’s family and the entire bobsledding community.”

END_OF_DOCUMENT_TOKEN_TO_BE_REPLACED

Do you like Buzz Breaks? We recently launched 12 in 12 — a series of a dozen breaks of past wax boxes and wax packs in a dozen hours. This is a single-pack break in that style — but not the launching of a new 12 in 12. (We’ll perhaps have one of those later this month. Click the logo below to see the previous posts in the series.)

END_OF_DOCUMENT_TOKEN_TO_BE_REPLACED

The Rio Olympics are well underway and, so far, many of the stars in the field of play have been either those we have seen before and have plenty of cards (Michael Phelps) or newcomers without anything (Lilly King).

But the U.S. Women’s Gymnastics Team has claimed gold and that has helped collectors and dealers claim green when it comes to their cardboard.

Now, of course, some of the demand has been there all along — regardless of outcome — but three of the “Final Five” appear in this year’s Topps Olympics release.

END_OF_DOCUMENT_TOKEN_TO_BE_REPLACED 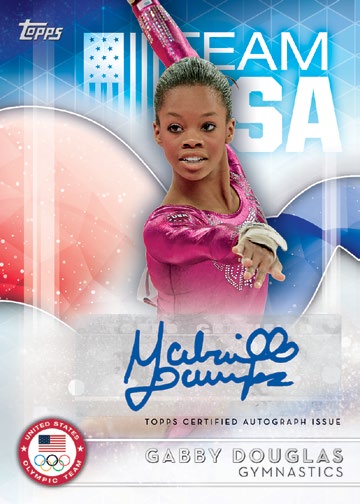 What: 2016 Topps U.S. Olympic & Paralympic Team & Hopefuls trading cards
Arrives: May 11, 2016
Box basics: One autographs, one Relic and one manufactured Relic in every 24-pack hobby box

What’s buzz-worthy: The latest batch of future Olympians arrives on cardboard in advance of the 2016 Games in Rio de Janeiro, Brazil in August. As with past Olympic releases, there are plenty of first-time signers who can become overnight sensations and sell very, very well once the Olympics arrive.