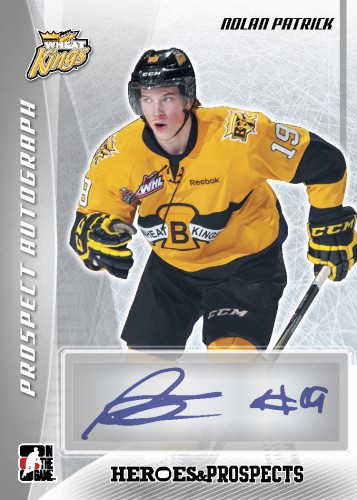 What: 2016-17 In The Game Heroes & Prospects hockey cards
Arrives: May 31
Box basics: 15 autographs or memorabilia cards per box (12 boxes per case)

END_OF_DOCUMENT_TOKEN_TO_BE_REPLACED 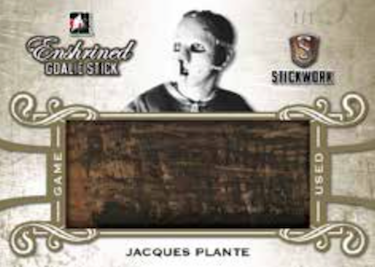 What’s buzz-worthy: Leaf’s ITG brand explores game-used from legends of the past and present via just one type of memorabilia.

END_OF_DOCUMENT_TOKEN_TO_BE_REPLACED

What’s Buzzing Today: Discussions about the $27,000 Topps Transcendent and plenty more with breaks across the board.

END_OF_DOCUMENT_TOKEN_TO_BE_REPLACED

Upper Deck is encouraging collectors to hit their hobby shops on Small Business Saturday and as part of that it has created a bonus card set available to those who make a visit.

It’s the 2016 Upper Deck Winter promotion and it includes 10 top names in the game.

END_OF_DOCUMENT_TOKEN_TO_BE_REPLACED 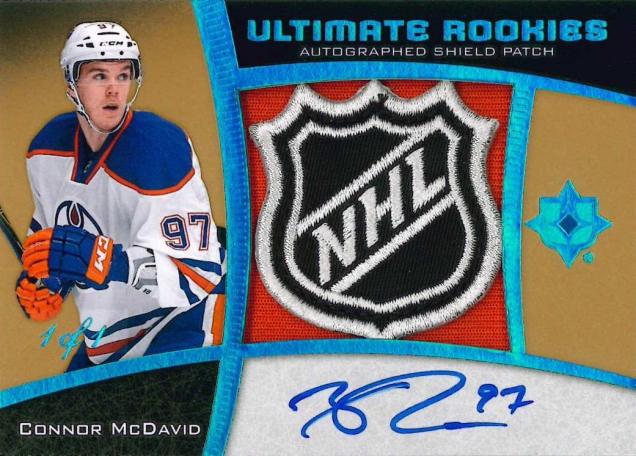 We’re less than two weeks away from the arrival of 2015-16 Ultimate Collection from Upper Deck and all of its high-end inclusions that include highly sought-after NHL Shields like the Connor McDavid seen above.

It’s not alone in the product.

END_OF_DOCUMENT_TOKEN_TO_BE_REPLACED

When the newest edition of Upper Deck‘s Goodwin Champions arrives on July 13, it will include some of the biggest names in the sports world, some of the weirdest new cardboard out there and tributes to those who helped America and its allies win World War II.

It’s a collectibles treasure trove and a history lesson all in one.

END_OF_DOCUMENT_TOKEN_TO_BE_REPLACED

Before “The Great One,” there was “Mr. Hockey.”

Gordie Howe, who led the Detroit Red Wings to four Stanley Cups and won six MVP awards before retiring as the NHL’s most-prolific scorer, died on Friday. He was 88.

“A lot of times when you meet your idols and people you respect and look up to, sometimes it’s not as great as you had anticipated or you built it up too much,” Wayne Gretzky told ESPN. “I was so lucky when I met Gordie. I was 10. It was so much nicer and bigger and better than I had ever imagined it. To this day when people come up to me that talk about having done a book report or speech about me, I always talk about the time that my fondest memory in public school was writing a book report on Gordie Howe.”

END_OF_DOCUMENT_TOKEN_TO_BE_REPLACED 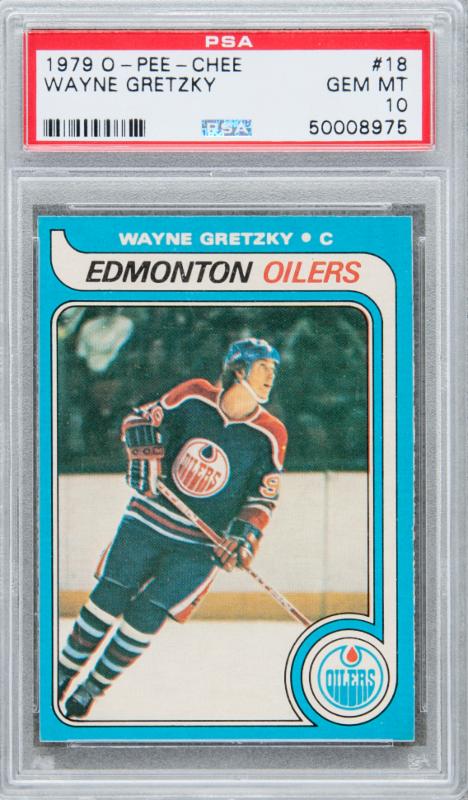 The greatest copy of The Great One’s greatest card will be sold later this summer.

It’s the only PSA 10 copy of Wayne Gretzky‘s 1979-80 O-Pee-Chee Rookie Card, and it will be on the block for the first time in five years as part of the Goldin Auctions sale during the National Sports Collectors Convention in Atlantic City, N.J., on Aug. 4.

“The fact that just one card has achieved this perfect grading is remarkable,” said Ken Goldin, the founder of the auction house. “With the recent surge in interest among serious collectors for high-grade examples of Rookie Cards, we expect this Gretzky card to establish a new benchmark. The average sales for a PSA 9 Gretzky’s has increased 600 percent in the past five years. If this card were to see a similar increase, it might become hockey’s first $500,000 trading card.”

END_OF_DOCUMENT_TOKEN_TO_BE_REPLACED

This year’s National Sports Collectors Convention is set for Aug. 3-7 in Atlantic City, N.J., but that hasn’t stopped Upper Deck from revealing the first promotional cards that will only initially be found at the event.

The company will produce a five-card VIP set along with a wrapper redemption program.

END_OF_DOCUMENT_TOKEN_TO_BE_REPLACED

It’s retro, but it’s not — and it’s arriving in hobby shops tomorrow.

It’s 2015-16 O-Pee-Chee Platinum and the hockey cards will have several colors and textures in a rainbow of autographs found one per hobby as well as a checklist that includes some of the biggest names in the game today.

END_OF_DOCUMENT_TOKEN_TO_BE_REPLACED

What’s buzz-worthy: Take the biggest names in the sports world (and the

Upper Deck stable of signers) and take it all high-end. How high-end? The cost per box to dealers — not the price to the public — is north of $10,000. What does it include? Among the inclusions in each box are an autographed acrylic box-topper, a 25-card autographed base set, a 30-card acetate Master Collection Puzzle set, one Michael Jordan Diamond card, one autographed Masterful Paintings card, one dual auto or dual cut auto card and one mystery redemption.

END_OF_DOCUMENT_TOKEN_TO_BE_REPLACED

What’s buzz-worthy: Black is back packing nearly just the hits and the hits include some of the biggest names in today’s game as well as the past. The Wayne Gretzky-Connor McDavid dual autograph above? Well, we all know that one’s big even if we don’t know the NHL.

END_OF_DOCUMENT_TOKEN_TO_BE_REPLACED 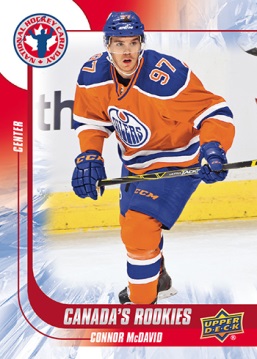 We’re about a month away from this year’s version of National Hockey Card Day — an Upper Deck promotion that gets two different sets into collectors’ hands if they visit a card shop during the hobby holiday.

END_OF_DOCUMENT_TOKEN_TO_BE_REPLACED 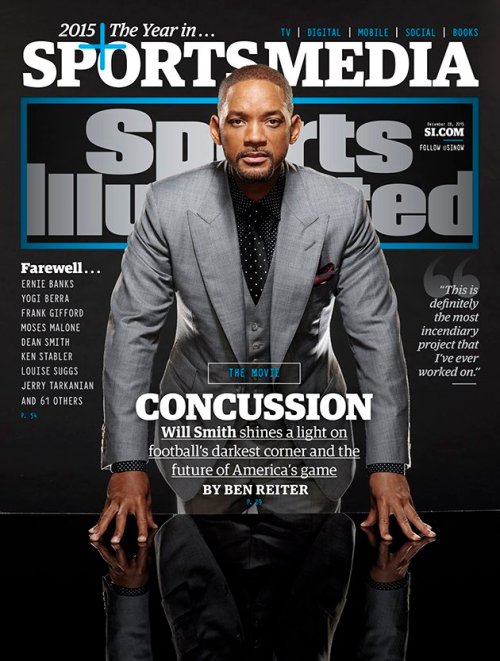 If you’ve watched any NFL games this season, you’ve likely heard the word “concussion” many times as the league has implemented new tests on players to help prevent future problems by assessing the here and now immediately following a hard hit.

On Christmas Day, a film about the issue of concussions in football called Concussion opens in theaters. You’ve probably seen the commercials for the film during NFL games.

Will Smith stars as Dr. Bennet Omalu, who discovered the degenerative brain disease called chronic traumatic encephalopathy, or CTE. It’s a real-life issue that has affected more than 80 former players — many you’ve seen on football cards and might have collected. The movie is an important one and Sports Illustrated has Smith on its cover this week to discuss the movie.

Is it the first time a celebrity has appeared on the cover of the highly collectable sports magazine?

END_OF_DOCUMENT_TOKEN_TO_BE_REPLACED 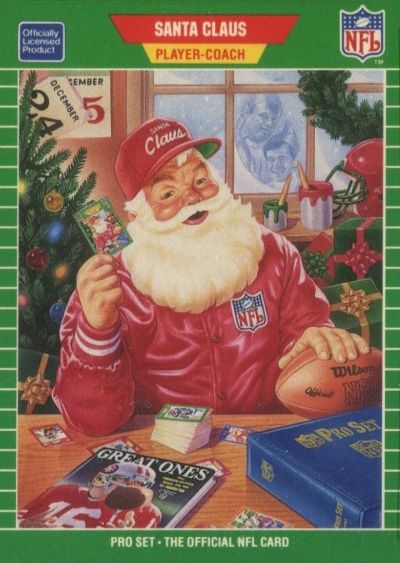 With the holiday season here, cardboard is probably on the minds of many Buzz readers as they wonder what might await them soon.

Others, like Buzz, might be thinking of Cardboard of Christmas Past — you know, some of the Santa Claus trading cards we’ve seen throughout the years. Most of it’s trivial and not all that collectable — but they all stand out in a way compared to our traditional sports cards.

1989 Pro Set Promos #1989
When Dallas-based Pro Set created this card during its first season of making football cards in 1989, it sparked a trend that we saw in not just football cards but other areas in the years that followed. (Boy are there some bad Photoshop jobs there in the 1990s.) For all intents and purposes, though, Buzz would call this one a “Rookie Card.” Yes, there were previous non-sports cards — but this was the one that put cards like this on the minds of the sports-collecting masses after it was mailed out to dealers and selected NFL-related people.

END_OF_DOCUMENT_TOKEN_TO_BE_REPLACED

A perfect copy of a basketball legend’s Rookie Card reached legendary status on Saturday night in a sale via SCP Auctions.

The card is a PSA 10 1948 Bowman George Mikan Rookie Card, which is the only perfect copy in existence. It set what is believed to be a new record for a single basketball card with its sale.