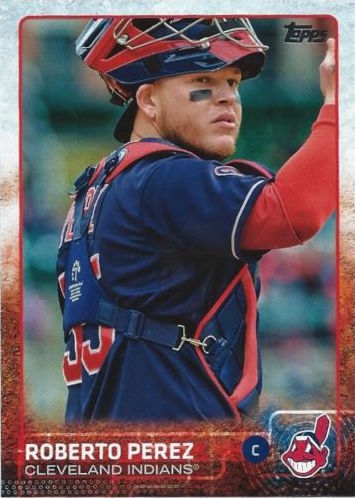 For all the hobby firepower on the field for Game 1 of the World Series last night, leave it to the light-hitting catcher with just one anonymous Rookie Card to grab the spotlight.

The catcher is Cleveland’s Roberto Perez and the only place to find his cards is in packs of 2015 Topps Update.

He doesn’t have an RC logo on his lone Rookie Card. He doesn’t have a single prospect card from the Bowman realm (or any other of the countless brands from other companies) and all he has is a base card and parallels in Update save for a few team-issued minor league team sets here and there. 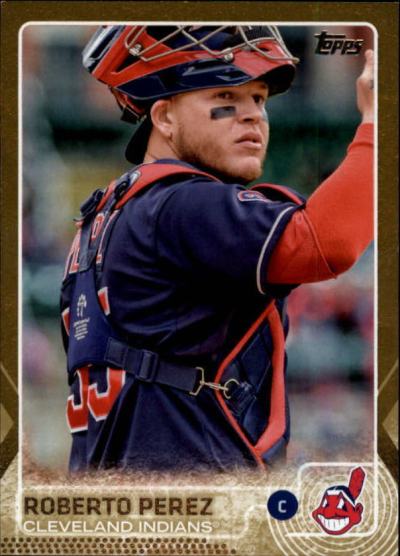 That’s the reality of a 27-year-old 33rd-round draft pick from way back in 2008 — and the reality of a guy who became just the fifth catcher in MLB history to hit two homers in a World Series game. The others? Yogi Berra, Gene Tenace, Johnny Bench and Gary Carter.

Sure, Corey Kluber‘s dominance was the story of Game 1, but two longballs and four RBI from the guy batting last in the lineup is stuff that won’t be forgotten — especially when you consider that he’s hit just 11 homers in his three-year (160-game) career.

Perez’s only RC has 10 parallels if you count its printing plates and that’s it for a guy whose cards have gone from pocket change to a few bucks overnight. It’s nothing earth-shattering just yet unless you had him sign the card at the ballpark — he has zero certified autographs — but if he’s got continued success coming then it’s the only option for a collector.

His star reliever sees that potential.

“He should be a star catcher,” Indians reliever Andrew Miller told Fox Sports after Game 1. “He’s going in that direction. He’s that good behind the plate defensively.”