What’s buzz-worthy: Leaf celebrates goaltenders with a mix of hits and Metal cards as part of a print-to-order release. 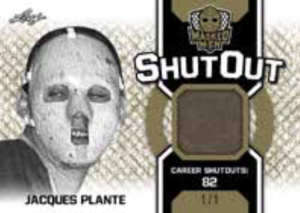 The Basics: There will be three Metal Masked Men cards per box along with the hits, which will be a mix of ink and memorabilia from a lineup that includes at least 10 different sets. There will be Stack The Pads, Shutout, Signature Goalies, Goalies Legacy Six, Vezina Winners, Goals Against, Vintage Goalies, Goalie Gear, Goalie Graphs and Jumbo Pads. … Some of the past stars in this one will include Martin Brodeur, Jacques Plante, Bernie Parent, Felix Potvin, Patrick Roy, Mark Richter, John Vanbiesbrouck, Pelle Lindbergh and plenty more.