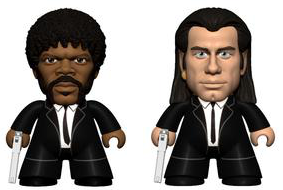 The memorable characters from Quentin Tarantino‘s Pulp Fiction will be hitting stores soon as 3-inch figures found in packs with a number of characters and a number of still-unknown chase figures to be found.

Unveiled by Titans Vinyl Figures this month, there are as many as 16 toys as part of the Pulp Fiction chase with the restaurant-robbing Pumpkin and Honey Bunny, the leading (hit)men Jules Winnfield and Vincent Vega, Mia and Marsellus Wallace and so many others seen in the gallery below.

There will be five chase figures in the mix — one of those being “ultra-rare” — atop these.

The London-based company hasn’t yet publicly offered a release date — but it has a Kill Bill lineup also in the works with a first series that’s set for an October release. (They’re in the gallery, too, with some other chase figures yet to be released.)