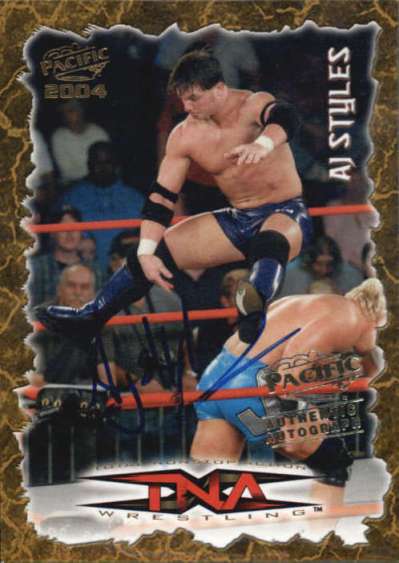 A.J. Styles is reportedly set to make his WWE debut sometime in the next week with the annual Royal Rumble pay-per-view set for Sunday in Orlando and the Raw and Smackdown tapings also in Florida next week.

That’s good news for wrestling card collectors since he’s a relatively plentiful autograph, a potential popular name for the story lines heading into the biggest time of the year with WrestleMania coming soon, and he’s also a bargain auto to pick up at the moment.

How much of a bargain?

As one of the former faces of TNA Wrestling for about a decade, Styles has plenty of ink — more than 200 unique cards including various parallels that were commonplace in TRISTAR’s TNA releases. His first autographs come in the perhaps-forgotten 2004 Pacific TNA set where he had a pair of autographs that were both short-printed. The Gold version above? Well, it sold on eBay last month for just $6.25. (No, seriously. And that took six bids.) If he makes any type of an impression in WWE, there will be enough interest to top that.

His autos have floundered in bargain boxes as he’s been off the radar (off American TV for the most part) in recent years compared to the past when he was with TNA. He’s been wrestling in Japan for the last few years and has spearheaded a popular faction called Bullet Club. WWE has teased the potential for the faction to arrive in the U.S. — a move with NWO-style potential that’s probably not all that likely but also something that could help his cardboard. A former Club member, NXT champion Finn Balor, is perhaps ready to have a larger WWE presence as well. How will that unfold?

Styles’ autographs have been had for as little as $1 on eBay and most going for $15 or less in recent months. Sales of rarer cards or those where he’s paired with others have been soft at no more than $30. Asking prices on some autos in current auctions are stronger but seem to have room for potential if the WWE spotlight shines bright and he makes an impact. His first WWE autos, should they come, will be sought-after, too.

Will any of it happen? We’ll find out beginning on Sunday.