Mark your calendars, baseball fans — this Saturday is your chance at some free baseball cards that you won’t find anywhere that day other than at your local card shop.

That’s because that day is Topps National Baseball Card Day, an annual event that helps draw new fans into the hobby and gives veteran collectors some new stuff to check out all in one place for free.

There will be six-card packs of NBCD baseball cards available free with a visit to a participating store, while a $10 purchase will yield a Mike Trout bonus card. (The full checklist for this promotion can be seen here — spoiler — and it includes Aaron Judge, Bryce Harper and Carlos Correa autographs in some packs.) Topps also will be using the hashtag #ToppsBaseballCardDay on social media for those who go and want to show off their new baseball cards, too. 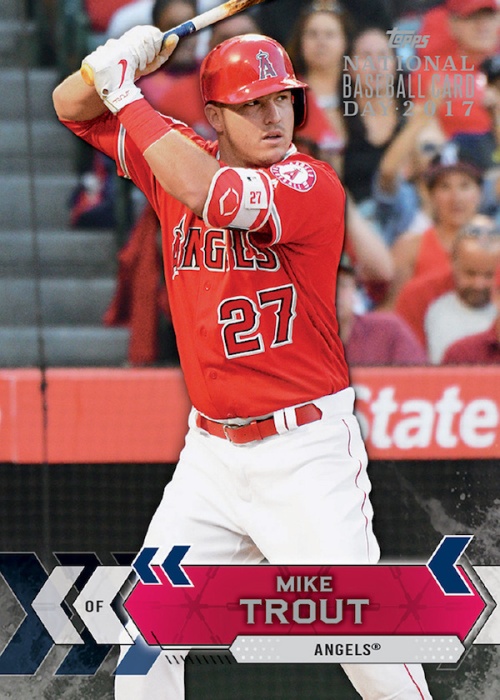 “Collecting baseball cards is one of the greatest hobbies that you can share with family and friends of any age,” said David Leiner, Topps’ VP and GM of North American Sports and Entertainment. “We are excited to watch National Baseball Card Day grow into a special event as new and long-time collectors head to their local card shops to rediscover Topps. It’s going to be a great day for everyone.”

Something else that will help drive interest in the packs? Autographed cards — they’re in there, too.

“I know myself and hundreds of card stores nationwide are very excited about Topps NBCD,” said Alan Narz, The Rip Master, who also runs Big League Cards in Casselberry, Fla., an Orlando suburb. “The timing could not be better with 2017 being one of the best years for baseball cards ever. It is so exciting to see such a great collaboration between industry partners to generate excitement with existing customers while attracting new customers and bringing old customers back to our great hobby.”

“We are expecting a huge turnout for NBCD,” he said. “It will be great for baseball as it brings in new customers both young and old. There’s nothing like watching a little guy open a pack of cards and turn to his dad and say ‘Look who I got.’”

In observance of National Baseball Card Day, Blowoutcards.com is suspending sales on its site from 9 a.m. to 9 p.m. (Eastern) on Saturday. During this time, the Blowout Forums will be available to members and a thread for NBCD discussion will be created. The Fantastic Store will be one of the shops participating in the event.

“The brick and mortar store is vital to the success and growth of our great hobby,” said Blowout’s Thomas Fish. “I encourage all to visit their card shop and participate in this exciting promotion.”

The performance and emergence of new hot rookies this season will only help fuel the fire for NBCD, according to Michael Fruitman, owner of Mike’s Stadium Sportscards in Aurora, Colo.

“This MLB year with products has been [crazy] with the play of so many rookies as well as the Rockies avoiding being in the cellar already. Having the chance to see all the additional MLB collectors that have jumped into 2017 products on that day makes it that much cooler. I’m starting to hold back some products for that day because if I do not, I’m not sure what I will have left to sell with as well as things are going.”

NBCD made its return last year after being sidelined since 2008 and it’s something that again has included promotion at all 30 big-league ballparks in advance of the big day with the backing of MLB and the MLBPA. (See the team dates and those checklists here.)

“This year they are going all-out taking it to a great new level,” Narz said. “MLB Players will be passing out packs of cards to promote NBCD and utilizing their social media, too — it is really cool to know the players are actually excited about NBCD. I have learned there are actually many active players that love collecting cards and want to promote the hobby to new collectors.”

And as a shop-owner, Narz knows its impact for his shop well.

“My store, Big League, is expecting a line of people before we open and hundreds to visit our store on NBCD. Should be one of very best days of the year,” he said. “It really is a promotion I think every card store is proud of and appreciative about. Over the past couple years, baseball cards have been making a great resurgence and this promotion will definitely feed the fire.”

Fruitman also notes that it’s a chance for shops to add to their networking and social channels.

“For any shop that does not already have an email list or does not fully employ social media, I would use that day to start compiling email addresses as well as rewarding collectors that check in on your Facebook or who mention you on Twitter,” he said. “While I’m sure my register will be a hot mess that day, it is not about just crushing it for 10 hours, it is about sharing the love and passion for the hobby and for developing long-term collectors.”

National Baseball Card Day is also a day to help make some memories, and that’s exactly what collector/blogger Ben Aguirre Jr. got when he took his kids, Alexa (age 7) and Antonio (age 5) to South Bay Sports Cards in Sunnyvale, Calif., last year.

“Our shop gave us three packs, one for each of my kids and one for myself. I let the kids pick which ones they wanted and I took the leftover,” said the 36-year-old Roger Clemens and Clayton Kershaw fan. “Then we went outside the shop to take a picture and open the packs.”

That’s when the day took a memorable twist.

“As I was reminding the kids that there could be an autograph in the packs, my daughter ripped open her pack and let out a little shriek and said ‘Oooh, Daddy!’ In the middle of her pack was a Greg Bird autograph. It blew my mind because you never expect to see that in free packs, even though they had been advertised.”

Last year’s event included bonus Kris Bryant cards and Aguirre noted that his shop made sure all three of them got one.

“I think the promotion is great for the hobby, especially for kids,” he said. “I’ve participated in other card giveaways and I expected key players and up-and-comers on a fresh design, probably containing lots of shiny foil or colors. I was quite pleased when we got our packs.”

But enough about last year. What about this year?

“Will we be back for more?” Aguirre asked. “Absolutely. Who can resist free baseball cards?”