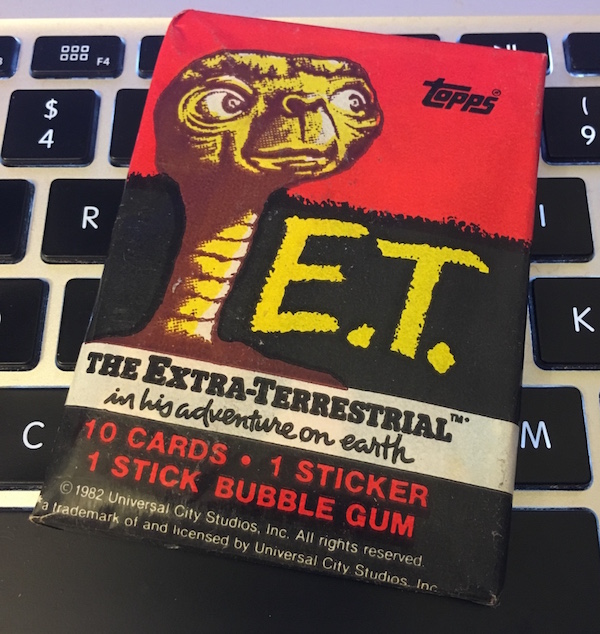 Autographs/Memorabilia: Maybe in E.T.’s universe … not in this one.

What’s Buzz-worthy: This one departs from the non-sports formula Topps followed in the past in that it doesn’t have actor cards leading off the set, instead a title card leading straight into highlights from the film. What’s the highlight here to this collector? The appearance of Drew Barrymore “Rookie Cards” and this pack included one along with an appearance on an unusual sticker that offers 16 stickers in one — also a dramatic difference from most stickers in Topps’ past among the set of 12 here. The visual appeal of these cards was limited a bit with a number of them from similar (and dark) scenes in the forest, but beyond the Barrymore cameos the “Night Ride” card is one that ranks among the better visuals with that iconic scene. Also pluses were cards clearly showing Eliott and E.T., so overall this pack was still a winner. The gum was quite nasty in this pack and its oils seeped into one card. This set is relatively available so just grab one that way if you’re a fan — that’s not phoning it in on this one.

Product Grade: B
Pack Grade: A
Fun Grade: B