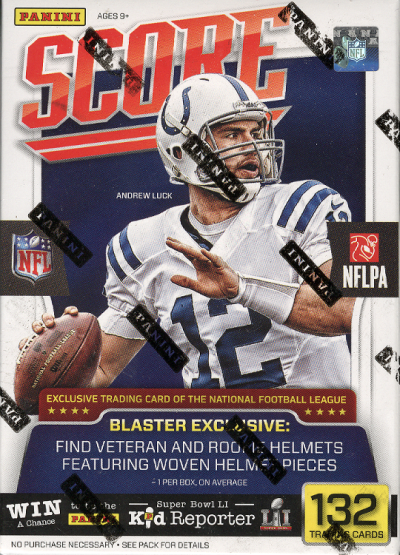 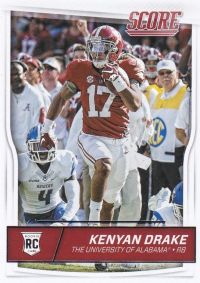 Autographs/Memorabilia: None (one manufactured relic per blaster)

What’s Buzz-worthy: The checklist on this one is a deep 440 cards with 330 of those being standard veterans and the rest being Rookie Cards. That could make for a dryer rip at times, but Panini makes up for it with a number of insert cards per pack and three RCs per pack, too. Some might say that the parallels of each insert are too much — it looks like Gold, Red, Green and Black versions are available atop each insert — but that adds to the star power and variety found here. Buzz thinks that’s a plus. … You’ll also find cards here of many guys you won’t see the rest of the year — also a big plus for player/team collectors and occasion a plus for re-sellers. … Score is the hobby’s NFL flagship release now with Panini America taking over the license on an exclusive basis and its jumbo boxes on the hobby side deliver ink as well as all kinds of collecting fun. … These blaster boxes only guarantee a manufactured patch, but there are autographs to be found in retail boxes, too. … This box delivered exactly as the odds predicted with 33 Rookie Cards and 44 inserts in the box. For those who remember Score’s early days, this release is in the ballpark — perhaps with a better design — but with a ton more inserts and, of course, the hits to make it fit in well today.