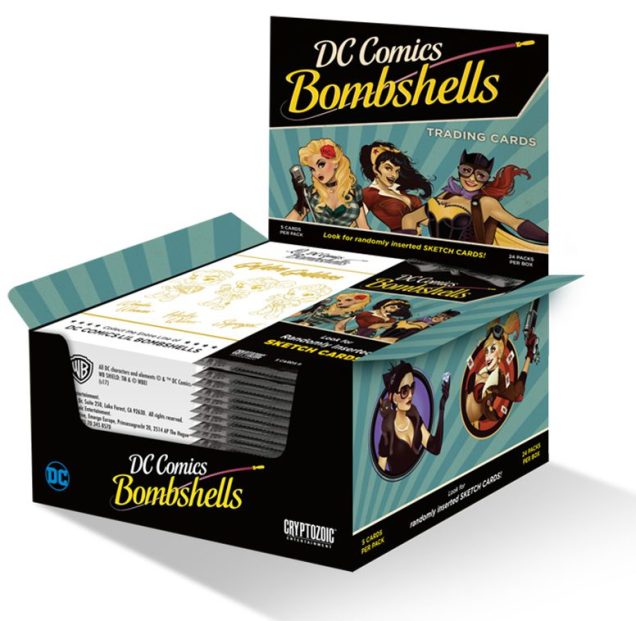 The box: 2017 Cryptozoic DC Comics Bombshells
Where to buy: BlowoutCards.com

What’s Buzz-worthy: This one bucks some of the traditional formats used for a non-sports set from Cryptozoic and it works. You get a 24-pack box with one of three Golden Goddess variant figures every time and your packs will include a sketch card and a selection of base cards and inserts from this set focusing on the DC Bombshells — the female stars of DC but with a 1940s flair. This box included a Supergirl figure (others will have Wonder Woman or Harley Quinn) along with a sketch of Wonder Woman and a printing plate, which is found one in every 11th box or one per case. This one included a full base set and all insert sets except for parallels. … The base set here is an unusual one numbering-wise with three sets in one — 21 DC Bombshells cover art cards from the comics, 21 cover variants from various August 2014 titles, 21 cover variants from October 2015 titles and a checklist. It’s a real visual checklist of past issues via the art — but without nameplates, blurbs and UPC codes to get in the way of the art — and the issues are noted on the card backs. (This is really a base set that would work well at a larger card size.) The insert lineup is a tad more vibrant with the Lil Bombshells vinyl sketches and final drawings making up a couple of good insert sets, while the two types of parallels offer some extra variety to break up the packs. There are really no weaknesses in this one and the price isn’t bumped up dramatically with the inclusion of the vinyl figure. All in all, I think this one works well — and there are plenty of dazzling sketch cards that could easily pay for a chunk of the box here, if not all of it.