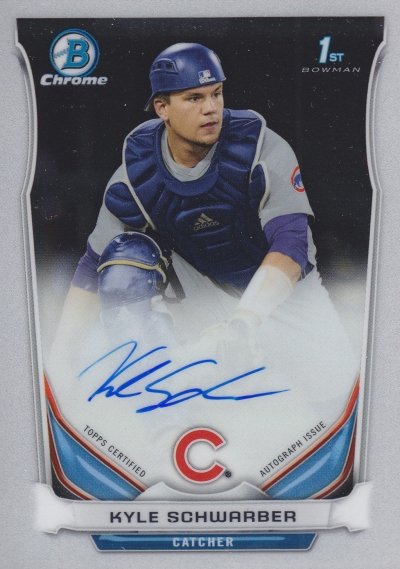 The Chicago Cubs are the one to watch on cardboard so far this postseason as their powerful pack of rookies helped knock off the NL Central champion St. Louis Cardinals. They had four newcomers on the field in their NLDS clincher but aren’t the only team bolstered by youth. Here are 11 key rookies from postseason squads who you can find in wax boxes or sets on BlowoutCards.com.

Kyle Schwarber
The 22-year-old Cubs outfielder has hit three homers so far this postseason, including one shot that may not have landed yet. (Actually, it’s being displayed atop the scoreboard — where it landed — for the rest of the postseason.) He’s building on an abbreviated rookie season that included just 69 games but 16 homers in that time.
On cardboard: Schwarber made his debut in 2013 in the Panini America USA Baseball sets and his first MLB cardboard arrived in 2014 Bowman Draft and Bowman Sterling. He also has cards in the 2015 Bowman releases as well as USA Baseball Stars & Stripes, Panini’s Immaculate Collection, Elite and minor league cards in Topps Pro Debut. He can also be found in Leaf Metal Draft. Also of note? His official MLB RC logo-branded Rookie Cards will be in 2016 products.
Key Singles: The hottest cards are his 2014 Bowman Chrome Draft autos whose parallels have routinely topped $1,000 when graded. 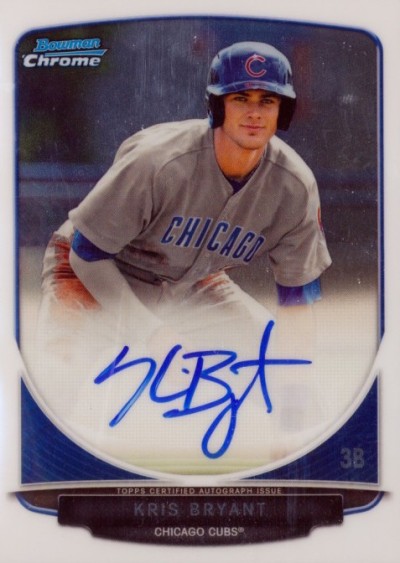 Kris Bryant
Heading into this season, this 23-year-old third baseman was the next big rookie for MLB and he delivered pretty well with 26 homers and 99 RBI while batting .275. He’s struggled a bit this postseason, hitting .150 with a homer, but he’s an iconic face for the team. Those who don’t collect as heavily probably know his name first among the young Cubs.
On cardboard: Bryant debuted in 2012 USA Baseball cards from Panini America before arriving on MLB cardboard in 2013 Bowman brands. His presence can be found in pretty much all Bowman brands since then with his Rookie Cards heavily placed into most sets this season.
Key Singles: Bryant’s 2013 Bowman Chrome Draft auto which was released in packs of 2014 products remains an iconic card. It and his 2014 Bowman Chrome auto are routinely chased by collectors but there are plenty of options, including affordable 2015 USA Baseball autos in Panini America’s Stars & Stripes set. 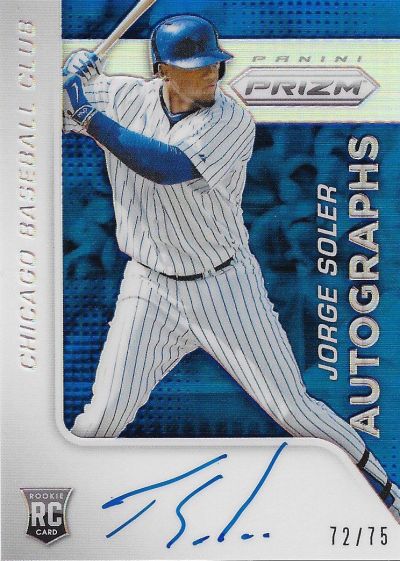 Jorge Soler
This 23-year-old outfielder has had MLB cards for so long now that we could have forgotten he’s a rookie on the field this season. His Rookie Cards are also found in this year’s brands.
On cardboard: Soler’s first Cubs cards came way back in 2012 Bowman brands, but he’s appeared in pretty much anything prospect-wise in the years since. He has more than 800 different cards from Topps, 200 from Panini and nearly that many from Leaf, too.
Key Singles: Of the Cubs rookies, he’s perhaps the most-affordable for a key card or for autographs. Grab his 2012 Bowman Chrome auto or one of its parallels first. After that, you can pick up autos easily in several brands. 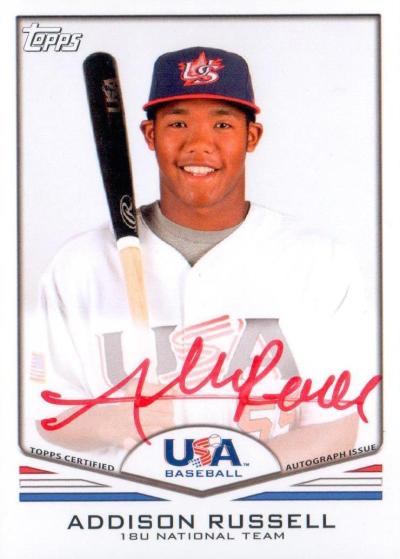 Addison Russell
Unlike the other Cubs rookies, Russell wasn’t home-grown — he was acquired from Oakland in the Jeff Samardzija trade last year. In 142 games as a rookie this year, he hit .242 with 13 homers and 54 RBI working both second base and shortstop.
On cardboard: Like others here, he made his cardboard debut as a member of USA Baseball. His turn came back in 2011 when Topps was handling that license, while his first MLB cards arrived the next year in Bowman brands. He also has plenty in Elite Extra Edition and Leaf’s prospecting brands. His Rookie Cards appear in 2015 sets — all as a Cub.
Key Singles: His 2012 Bowman Chrome auto and its parallels seem to be getting all the attention, but his 2011 Bowman Chrome USA auto and its boxed set buddy (an on-card auto) are immensely undervalued at around $50 — sometimes less. 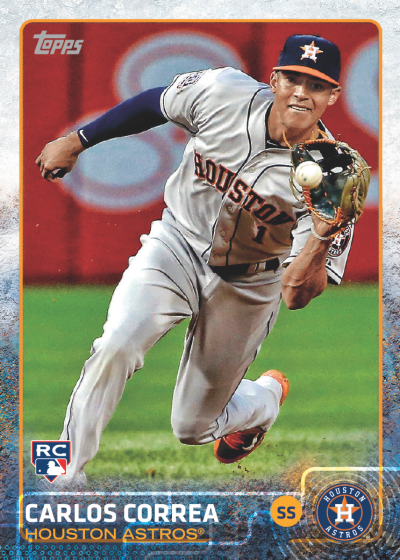 Carlos Correa
The Astros’ 21-year-old shortstop and front-runner for the American League Rookie of the Year smacked 22 homers in 99 games while hitting .279 — all just three years after being taken with the No. 1 overall pick in the MLB Draft. The Captain hasn’t lightened up in the postseason, hitting .412 with a pair of homers in four games against the Royals. His two-homer game in Game 4 made him the second-youngest to ever record that feat in the postseason.
On cardboard: Correa basically didn’t have any cardboard before he was drafted, so it’s game on from 2012 forward. He appears in Elite Extra Edition, four Leaf sets and Panini Prizm that first year, while his first MLB cards appear in 2013 Bowman brands. His Rookie Cards are found in 2015 brands — and going forward his autographs will be exclusive to Topps brands.
Key Singles: His 2013 Bowman Chrome auto and its parallels are the prime players here with high-grade slabbed copies routinely topping $1,000 in auctions and pushing as high as $5,000. 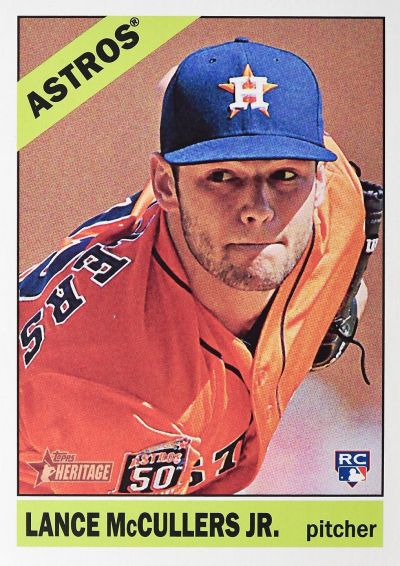 Lance McCullers Jr.
This rookie’s dad played seven years in the majors and never made it to the postseason. He’s already there. His record this season was respectable — something to improve upon — but he looked solid in his first postseason start, going 6-plus innings and allowing just two earned runs in a no-decision against Kansas City.
On cardboard: This second-generation MLB pitcher doesn’t have a lot of cardboard, but he’s been available to collectors for the last five years thanks to appearances on USA Baseball cards back in 2010. His first MLB cards arrived in 2013 Bowman brands and his relative lack of cardboard could help spark some interest. Meanwhile, his Rookie Cards are arriving in this year’s later sets.
Key Singles: It’s a bit of a toss-up here with his 2013 Bowman Chrome autos and his 2010 Bowman Chrome autos leading the way. One overlooked card might be his 2010 Topps USA auto. 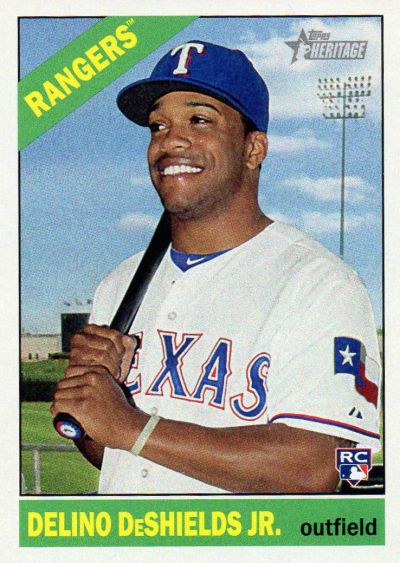 Delino DeShields
This second-generation MLB player was originally drafted by the Astros in 2010 — eighth overall — before the Rangers picked him off in last year’s Rule 5 Draft. He’s turned out to be a bargain with 25 stolen bases and a .261 average in 121 games as a rookie. In his first four postseason games, he hit .300 with a pair of RBI and a stolen base.
On cardboard: He hasn’t really established himself on a national scale, so his earliest cards are the ones that collectors should consider right now. His Rookie Cards are starting to arrive in this year’s later releases, while his earliest prospect cards from 2010 forward seem under the radar.
Key Singles: His 2010 Bowman Chrome Draft auto and its parallels are the go-to, but with fewer than 100 different certified autos right now there could be more demand than supply in some instances. There’s a lot of room to grow if he plays well. 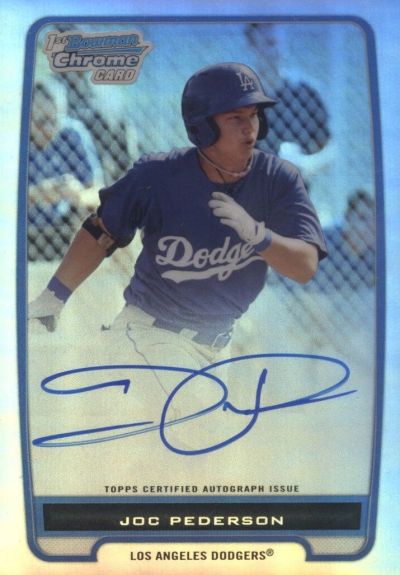 Joc Pederson
In the first half of this season, this 23-year-old outfielder looked primed for one of the best seasons ever for a National League rookie. Only Pederson and Albert Pujols had ever hit more than 20 homers before the All-Star break. However, Peterson finished the year with just 26 bombs — and his .210 batting average shows there’s room to grow — but he’s in the right kind of market to make waves as a young slugger.
On cardboard: His earliest autographs arrived in 2010 Elite Extra Edition and his cardboard was a bit scarce until his arrival in Bowman brands in 2012. He seems to be everywhere as a signer in 2015 brands where collectors can also find his Rookie Cards.
Key Singles: His 2012 Bowman Chrome autos and parallels get a lot of attention, but that 2010 Elite Extra Edition card might be seriously overlooked. 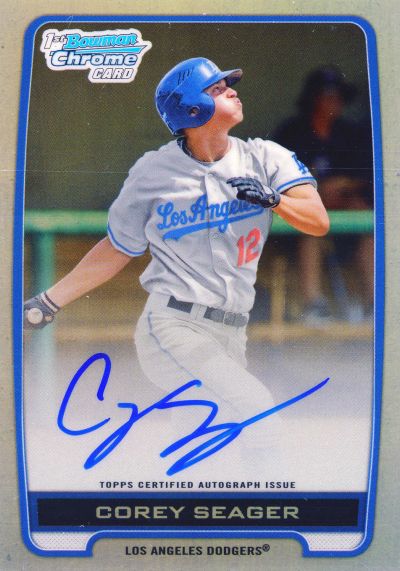 Corey Seager
The Dodgers called upon their highly touted shortstop late in the year and he impressed with a .337 average, four homers an 17 RBI in 27 games. His postseason hasn’t been as strong (.167 in four games) but one big highlight could erase all that if the timing is right.
On cardboard: He’s yet another USA Baseball guy, meaning we’ve had cards and certified autos for him since way back in 2010. His first MLB cards arrived in 2012 Bowman brands, while his Rookie Cards will likely be among the notables in 2016 releases. (He doesn’t have any RCs just yet.)
Key Singles: His 2012 Bowman Chrome Draft autos and parallels are scorchers but his 2010 Bowman Chrome USA autos seem to be a contender for one of the best bargains. 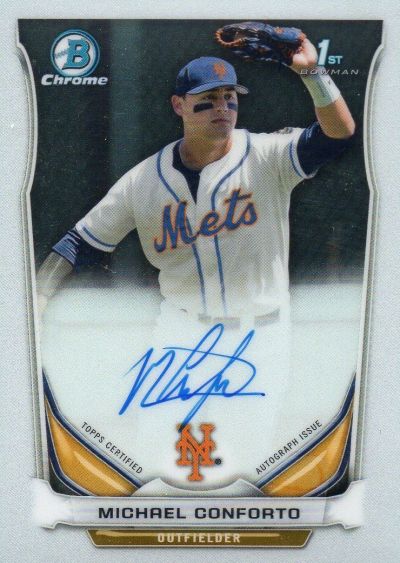 Michael Conforto
Little more than a year ago, he was the 10th overall pick in the MLB Draft. Now, he’s looking more like a mainstay in future Mets lineups. As a rookie, he hit .270 with nine homers and 26 RBI in 56 games. In his first three games this postseason, he added a homer and two RBI.
On cardboard: Conforto was a teammate of Kris Bryant as a member of the 2012 USA Baseball squads and that means he can first be found in Panini America’s sets from that year. (And also in 2013 USA sets.) His first Mets cards arrived last year and his first Bowman Chrome autos (2014’s design) were released in 2015 Bowman Chrome packs because they were returned too late to be put into the 2014 release.
Key Singles: His 2014 Bowman Chrome autos and parallels as well as his 2015 Bowman Inception and 2014 Bowman Sterling auto parallels are consistent money-makers for those who find them in boxes.

Noah Syndergaard
“Thor” was a first-round pick of the Blue Jays back in 2010 but, as part of the R.A. Dickey trade, his MLB debut came this season in New York. He went 9-7 with a 3.24 ERA in 24 starts as a rookie but lost his postseason debut against the Dodgers. Either way, he’s still one of the team’s rookies to watch.
On cardboard: His first autos came back in 2010 Chrome Draft and Donruss Elite Extra Edition, while his standard Rookie Cards are arriving in this year’s later releases like Five Star, Heritage High Number, Topps Chrome and Bowman Chrome.
Key Singles: Rarer parallels of his 2013 Bowman Sterling auto seem to be out-selling his 2010 Bowman Chrome Draft autos showing him as a Blue Jay. Also strong are his rarer 2015 autos showing him as a Met — Topps Chrome and Bowman Chrome.

What do you want to see on Blowout Buzz? Email BlowoutBuzz@gmail.com.