The Basics: There will be 200 cards in the standard set of 2016 Topps Pro Debut with each card having a Gold (/TBD), Orange (/25), Red (/5) as well as 1/1 Black and printing plate parallels. There also will be photo variations for a small selection of players in the product. … Insert cards in this one will include Distinguished Debuts of 25 first-time pros in 2016, Promo Night Uniforms showcasing the weird jerseys often worn by minor-leaguers and the newest Make Your Pro Debut promo cards where a fan can become a player for a day. 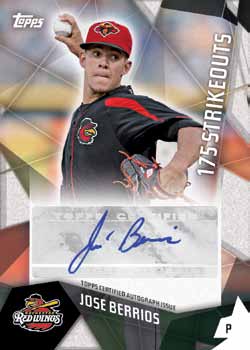 The Relic lineup will feature the return of Fragments of the Farm — the unusual memorabilia lineup introduced last year where teams selected something that they felt were memorable or iconic. The Lake County Captains’ card this year? That’s “Hair from Jobu promotional Bobblehead” because the Captains are an Indians affiliate — and Major League is like the greater baseball film ever. (Duh.) Manurelics are back with Pennant Patches cards as well as Mascot Patches, too.  Two of the sets will have a Gold (/TBD) parallel, while all will have a Red (/5) and 1/1 Black parallel along with printing plates. … A preliminary checklist was not released.