The most-expesnsive box of NBA cards ever is about a week away and Panini America took some time to tease a massive non-basketball inclusion in the brand that includes names well beyond the world of basketball.

One example? George Armstrong Custer who died at The Battle of the Little Bighorn back in 1876. Just think how much the world has changed since that time — and then wonder aloud how many of his autographs could even still exist. And then what it might have cost to land the document.

Although many of the cut autograph sets made in the last decade or so aren’t fully checklisted, it appears this is his first cut autograph — and it will be found in a box of 2014-15 Panini Eminence basketball cards next week. (For trivia’s sake we’ll also mention here that basketball didn’t exist until about 1891 — just one of those many world changes since Custer.) 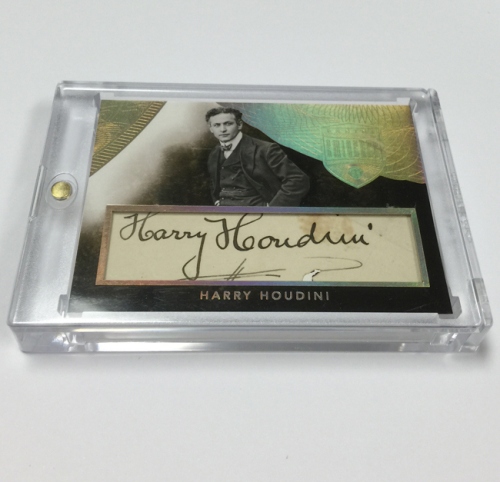 Another autograph in Eminence that will undoubtedly generate some dollars is Harry Houdini. While he had a cut autograph in a past TRISTAR product, it goes without saying that a signature of the most-famous illusionist/escape artist will be of interest all these years after this death in 1926. A legendary name never goes out of style.

And then there’s Henry Ford, Charlie Chaplin, Abraham Lincoln, Nelson Mandella … and so many big-name sports stars, too, like “Pistol Pete” Maravich, Wilt Chamberlain, Ty Cobb and Babe Ruth … this one will be as interesting to watch as the metal-embedded autographed cards of today’s stars.

A small sampling of the images is below and you can find even more by clicking here.