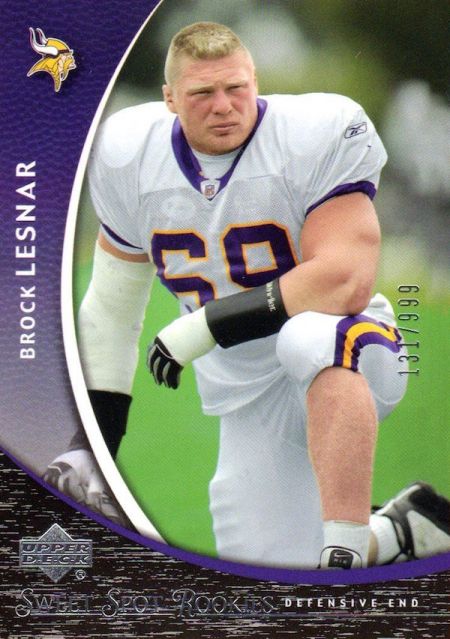 The “Biggest, Baddest Card Ever” is how tonight’s UFC 200 is billed and it’s had its fair share of drama when it comes to the card itself.

And there’s plenty of cardboard to be found for it, too, with Topps on site for the UFC Expo with promo cards (though not as many as it had planned due to the Jon Jones-forced card change) and it will have even more cardboard with the launch of Topps Now UFC with this event.

But the one player on the card tonight in Las Vegas who doesn’t have any new cards — but should figure into the show prominently win or lose — is current WWE fighter Brock Lesnar, who is making a one-time (or is it?) return to the Octagon with his organization’s approval (or is it the sign of something more?) for the fight. (Update: Lesnar has been added to the Topps Now debut checklist after his win.)

He’s got plenty of cardboard. 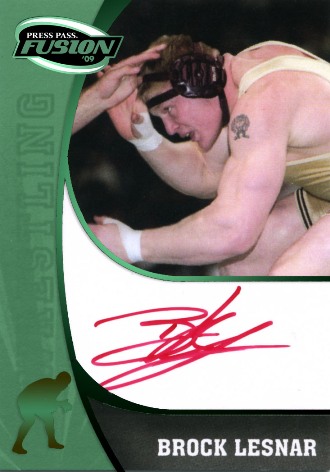 The former UFC heavyweight champ was a star amateur wrestler in the high school, junior college and college ranks before he became a star for the WWE, then left to pursue an NFL career, then MMA and then back to WWE. Because of this journey, he has cardboard representing him in all four pastimes.

Lesnar’s time as a collegiate wrestler is seen on cards in 2009 Press Pass Fusion, a one-time multi-sport release. His eight autographs out of nearly 20 cards all were available only via redemptions and are his most-affordable autos out there.

Lesnar’s time with the Minnesota Vikings — a pre-season-only affair as he ultimately did not make the team — is reflected on 15 cards from Donruss/Playoff and Upper Deck. All but one of his football cards is serial-numbered in the 2004 Leaf Rookies & Stars, Playoff Honors and Sweet Spot sets. These cards still command good money in part because of the novelty and there being so few of them to go around.

The Beast (5-3 in MMA) has nearly 1,000 different sports card appearances and the rest of them are from his WWE and UFC years. He’s not been a plentiful signer with just over 100 different certified autos (and that includes his Fusion cards). Most of those are from UFC with his first WWE autographs coming just last year from Topps. Over on the memorabilia side, it’s about the same with roughly 150 different memorabilia cards and two-thirds of those from UFC and the rest WWE. Generally his autos are pricey, but high-grade rare copies can command serious cash.

His WWE “Rookie Cards” came in the 2002 Fleer Royal Rumble and 2002 Fleer Raw vs. Smackdown releases, though he also has a Partnerships subset card in 2002 Fleer WWE Absolute Divas set along with career companion Paul Heyman.

Meanwhile Lesnar’s opponent Mark Hunt (12-10) has zero autographs, zero Relics and approximately 100 standard cards. His debut with Topps came in 2012 after nearly a decade as an MMA fighter.